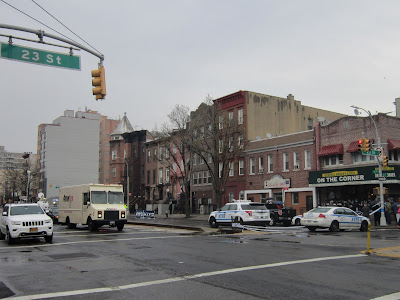 Tragic news of a fatal hit-and-run at Fourth & 22nd Street this morning, when a local business owner was run down while trying to stop the theft of his own truck.

The 63-year-old victim had hopped into an SUV after spotting the suspect zoom off in a flatbed truck from his shop, A&D Iron Works, on 24th Street in Greenwood, just a few blocks from the 72nd Precinct, sources said.
The thief got a few streets away before getting stuck in traffic at 22nd Street and Fourth Avenue around 9 a.m. and the victim caught up with him, sources said.The victim ran up to the truck and was trying to pull the perp out of it when he was pushed to the ground, sources said.
The suspect then gunned it, running over and killing the man, sources said.  (NY Post)

The perp fled on foot, and as of lunchtime, remained at large.
The victim was well known in the community.  A worker at the On the Corner grocery store, at Fourth & 23rd, where a small crowd of family and local residents gathered today, said that he and his family were in the store often, with the business close by between Fourth & Fifth. 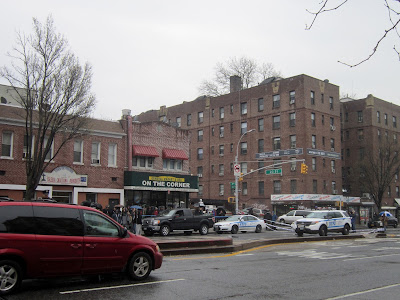 Update:  DNAinfo has a complete report on the hit-and-run, and identifies the victim as Phil Dellegrazie, who had owned the iron works on 24th for around forty-five years.

Coworkers were devastated by Dellegrazie's death, (co-worker Pablo Rodriguez) said.
"I worked for him for 10 years. He was a good guy. I love him. I miss him already," said Salvador Martinez, an A & D worker.


Posted by onemorefoldedsunset at Monday, April 04, 2016