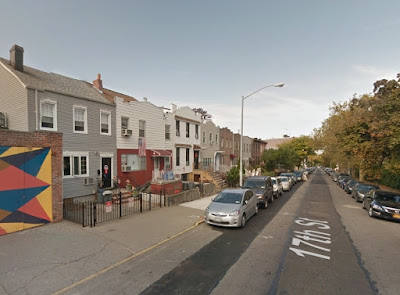 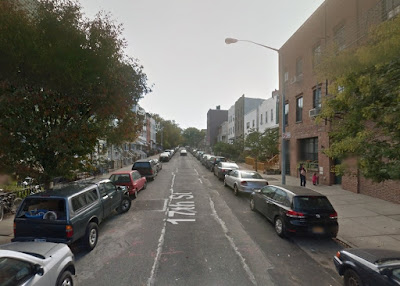 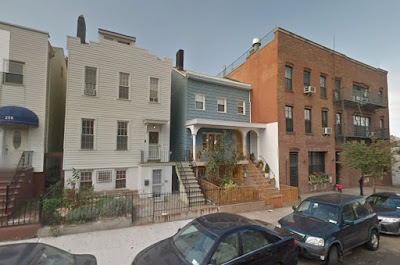 17th between Fifth & Sixth was one of the blocks sliced open by construction of the Prospect Expressway in the 1950's, , when over half of the housing on the northern side of the block was razed .  Apart from this, it looks like a fairly typical South Slope/Greenwood block, comprised of wood frame houses & a smattering of brick. The empty premises of Aaron's ladies' clothing store ("Unless you're husband's in the business"...) & a newly reopened Associated supermarket anchor the bottom of the block. The Open Source Gallery, near Sixth, relocated up the block after the Associated fire of 2010 damaged its original storefront space.  There's a small playground on the block, one of the many little slivers of park & community space that came with the expressway. There's a steady muffled roar of traffic.

According to a new realtor ad, courtesy of Town Residential, LLC, an open-plan apartment in a former furniture warehouse on 17th offers the experience of "Soho in the South Slope." While we're all used to broker-speak hyperbole (Soho on 17th, how droll), & the interior photographs show slightly peculiar views,  it's the renderings that will blow your mind.  Less South Slope, less Soho, more Bada Bing Miami! A view of a street dominated by enormous high-rise buildings & palm tree lined villas. A manicured rooftop garden (more palm trees abound) where loungers & curtained cabanas surround an azure pool. A twenty-something sashaying across a marble-floored lobby. Bros & their consorts working out in the gym, where windows offer views of (you've guessed it) more palm trees.  Another twenty-something in shades and a short summer dress steps out of the lobby just as a sports car pulls up in the circular driveway.  An apartment or rec. room opens onto a huge open terrace, where more white, summery folks are mingling.  What dreamer conjured up this Floridian fantasy?  It's some trip.  Of course I'd love to offer pictures, but YOU can catch them here, and maybe you should look soon, before someone in their right mind removes them.  It's the South Slope of your dreams .....

Update - 4/11. The fabulous renderings are gone, and now there's just one sober picture showing views of Fifth & the Manhattan skyline.  The pool, the palm trees, the sports cars, the glittering marble lobby ... all vanished!   Reality's a very dull replacement.


Posted by onemorefoldedsunset at Sunday, April 10, 2016