Here's the Sam Steinberg film I mentioned yesterday. The short, made by filmmaker Ed Gray in 1971, is now available for public viewing. Here's Steinberg, a Brownsville native, with a ghost of a city accent you'd find almost impossible to hear today, and a Morningside Heights campus summoned back from another student era entirely.

A group of '75 alums, now in their sixties, returned yesterday to view the exhibition of collected Sams, gathered from amidst their ranks.  I'm not one for reunions so much, nor am I even a Columbia grad myself, (though I spent a brief but happy period of time in the 80s working at Columbia University Press), but this was a beautiful affair.  Towards the end of the day, poet Fernando D. Castro read to the assembled gathering.

We Latino boys, walking contradictions, blunt outsiders banging typewriters. Trying to cobble a humanities paper, walking contradictions; orphan contradictions sent to Columbia with a one way ticket: Julio Escobar, Henry Feliciano, George Guttlein, Tony Rivera, Edwin Vega, Angelo Nuñez and others. We dreamt in Spanglish, we dreamt of leaving New York, then bankrupt and derelict. We dreamt of being redeemers, and we dreamt about giving our children what we didn’t have. We dreamt of vacations which we couldn’t afford like the rich classmates from Long Island who paid almost full tuition.

Then there was angelical Sam Steinberg. “Want a paintin’? Got boids, moimades, snakes! Need a Hoishey bar?” Innocent paintings of angry cats, mermoids, he was our mascot, our artist in residence without a forum or historical references. No term paper required to irritate my permanent writer’s block. Sam’s sister mermaids, psychedelic menagerie of angry cats, dinosaurs decorated my classmates’ dorm rooms. 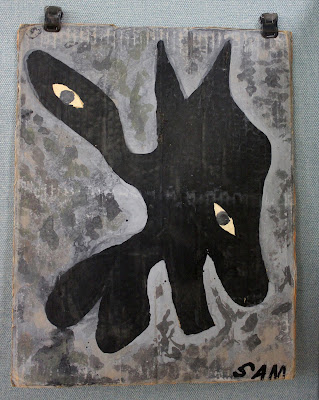 Posted by onemorefoldedsunset at Sunday, May 31, 2015

Beautiful film. Thanks for sharing it and introducing me to Sam's work. Also great to see footage of Morningside Heights in those days. Dig the Gremlin!

I'm glad you enjoyed the film. It was a very nice gathering, and quite a contrast to the sleek alum events going on nearby. Over a hundred more Sams have been located since the exhibition was put together, and there are hopes that a museum might be interested in putting on a show. We have a couple of Sams, one of which is a portrait of Richard Nixon!