This one's quite something.  Ideal Properties has just listed a Park Slope development site for $15,000,000.  The location isn't specified, but it's easily identifiable as 16th between Fifth & Sixth, and presumably comprises numbers 220-222.  This property's a bit special, because the irregular L-shaped lot at 220 extends behind a number of properties on 16th almost as far as Sixth Avenue.  The lot includes a number of garage structures.  Here it is today, 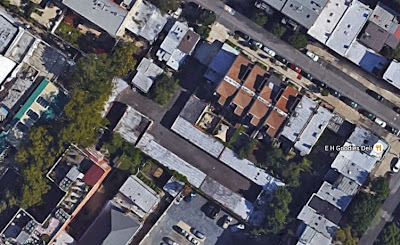 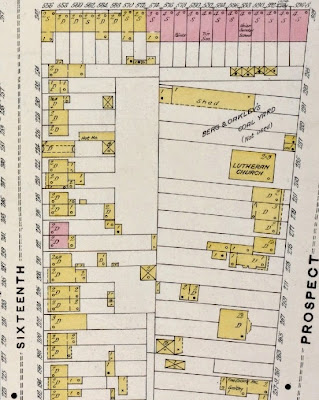 The 1888 map is fascinating, because it indicates the businesses and institutions of the period. Just this section of a block shows a hot house, a tinsmith, a smithy, a coal yard, a paint shop, and the Union Sunday School.  16th between Fifth and Sixth has been ravaged by developers, but still contains some fine old houses.  The house at 220 is gone today, but its immediate neighbors to the west are still there, along with a number of other brick and frame houses dating at least as far back as the 1870s.  There's also a front house/ back house combo that I covet.

The $15,000,000 price tag marks an attempt at an almighty flip.  Both 220 and 222 were bought a year ago by Grekam Realty Management, 220 for $1,820,000, and 222 for $980,000.
The address for Grekam is registered as 263 Prospect Avenue, the site of the Grand Prospect Hall. Local residents will remember that the owner of the Grand Prospect, Michael Halkias, proposed building a hotel and parking lot next to the hall on Prospect Avenue back in 2011.  The hotel has not been built, but by '14 Halkias had amassed seven properties on 16th, one of which gave him a connecting driveway to Prospect.

Fifteen million sounds like a crazy price, but it's 2015, and this is a large and unusual property. I have no idea how the size and shape of the lot dictates the scope of development. A good portion of it is surrounded by recent, less than attractive buildings, but there's also St. John's on Prospect & some smaller residential buildings. 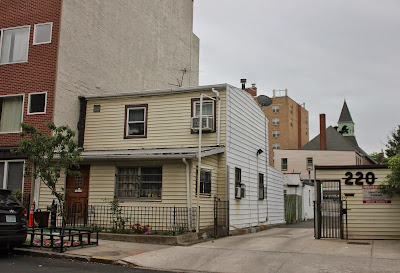 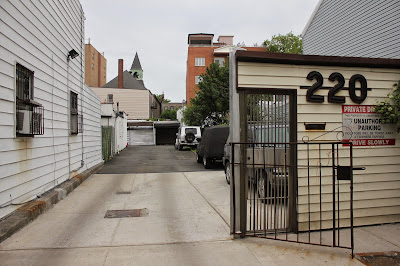 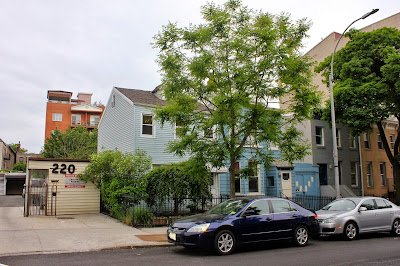 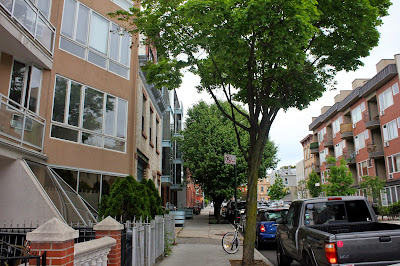 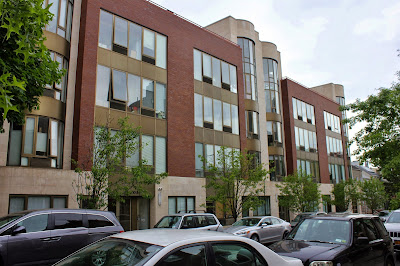 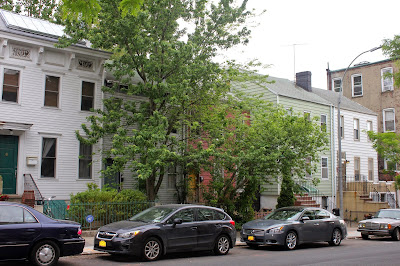 Posted by onemorefoldedsunset at Friday, May 22, 2015

I know everyone kind of takes everything in stride nowadays, but seriously, the property was just purchased for $2.7 million last year. I could understand a comment like "yeah, from $2.7M to $5M in a year is a lot, but stuff is crazy now!" ...But, $2.7M to $15M?? I don't think so.

I completely agree that the price seems unrealistic, even in this market. It's pitched as a development site, but I don't see how even a developer would go for that price. What do you think - is this just a Halkias delusion?

I live on this block and when Halkias bought this property he kicked everyone out of the parking spots and raised the rent 4x on everyone if they wanted to "renew" on a month to month lease.

He made it clear when he purchased the property he was going to develop it for his master plan. Obviously he learned at one point the property is to hard to develop, or he couldn't get the money from the bank for his vision.

The issue with this property is there is a right of way through it that needs to be maintained by the large condo on the Prospect avenue side that cuts straight through the property as well.

Thank you for explaining some of the issues here. I'm sorry you have to suffer this kind of presence on your block. So many properties going on the market around here for egregious prices, but this one may set a new broker/owner record for greed and delusion.
Do you know anything about the history of the property? Its original use in the nineteenth century?
Thanks again for your comments.