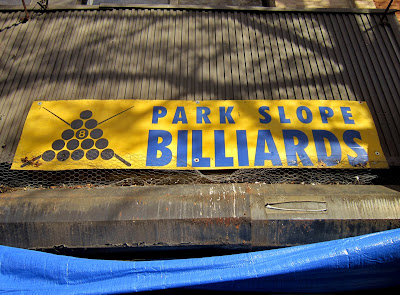 The Times returns to Fifth Avenue's Jubilat two years on, and notices accelerating neighborhood change that includes the recent sale of Eagle Provisions.  There's a nice & well-deserved repeat profile of Jubilat, but also some of that out-of-touch Times observation you can find in their Living In real estate pieces:

For 25 years, New Yorkers of Polish heritage, including residents of working-class enclaves like this stretch south of Park Slope, have come to Jubilat for the flavors of home, speaking in their native tongue while choosing from among the store’s many versions of kielbasa. But these days, older Poles share the neighborhood’s sidewalks with throngs of Spanish-speaking children. New apartment buildings in the area are attracting a more affluent crowd.

Hmm. These days?  Spanish-speaking children have been thronging the sidewalks of the neighborhood for decades, be they of Puerto Rican, Dominican, or, more recently, Mexican, or Central/South American heritage.  A 1980 Census of Population and Housing showed census tracts around the area mentioned in the Times article to be 40% - 60% Hispanic.  Perhaps it would have been more pertinent for the Times to have indicated how development/affluence is driving out the families of these children.
Still, the Times does get in a cutesy, story-ending quote from a newer resident.

Ms. Volturo’s husband, Josh, said he had learned of the place from a cousin who used to live nearby. “You can get the same kind of sausage at Whole Foods for, like, 10 bucks,” he said. The couple paid less than half that at Jubilat. “We go and get everything else we need from Whole Foods.”

A No-Brainer: Saks Off Fifth Coming to Sunset Park (Racked)

"It'd be located inside 30,000 square feet of the ground floor of the eight-story Liberty View Industrial Plaza, the same complex that Bed Bath & Beyond signed on for last year. "This site is a no-brainer for any well-researched retailer," Chase Welles of SCG Retail, which is marketing space at the adjacent Industry City, told the publication. "The high density, the solid incomes, the impressive education levels added to some of the highest traffic counts in the country equal a no-brainer."


Posted by onemorefoldedsunset at Sunday, May 24, 2015