Closer to home, and opposite each other at Fourth & 16th, a little excitement on two (for now) developer-free corners.


559 Smoke Shop, next to the Pentacostal Church Vision of Jesus Christ, displays the World's Largest Hookahs! 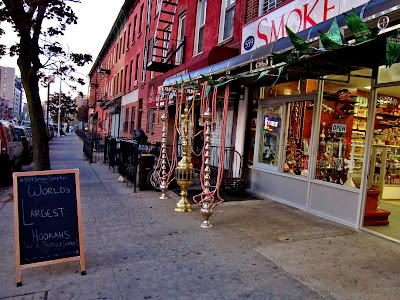 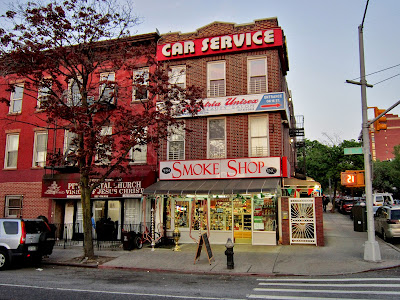 Across the street a new restaurant's appeared.  From J & R to Country Boys to Boqueroncito, to the new Aroma a Mexico. Boqueroncito closed last summer, & the restaurant stayed shuttered and advertised for sale into fall, through the long winter, to springtime.  With two buildings for sale around the corner on 16th, I feared big changes were on the (development) way.  Not yet, thank goodness.  Instead, another restaurant's making a go of it.  I hope it does well, but it'll have to contend with some serious competition.  Sadly (realistically?) the food seems geared to the tastes of newer residents, with a menu written all in English and an overly large selection of burritos. These include the Brooklyn, the Kale, the Prospect Vegetarian, & last but not least, the Aroma Special is off the Hook.  I'm hoping there are good things waiting in the quieter corners of the menu. 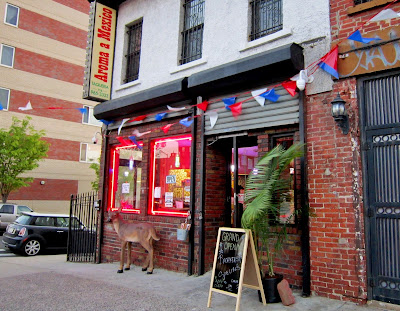 A wide-eyed deer gazes at the Guinness-worthy hookahs across the way.  Frankly, a coyote would be better than a deer but any wildlife on the avenue's a welcome sight.


Update - 5/13
South Slope News has a review of Aroma a Mexico today, which reminds me that I completely forgot about 2 Brothers, which came in (briefly) after Boqueroncito.  SSN gives the food at Aroma a big thumbs-up, so it sounds like a place to check out.


Posted by onemorefoldedsunset at Friday, May 08, 2015