Today is the 199th anniversary of Walt Whitman's birth, and his spirit is still lodged in every atom of the city. Who better than Whitman to celebrate the spirit of the loafer, or the brush of bodies in a crowded street?  Who better than Whitman to voice our purest democratic impulses, our physical longings, our tenderness of feeling for the strangers around us?  Who whispers in our ear, sees what we see, hears what we hear as we walk the streets by day or by night? When we cross a bridge or take a ferry, who comes along for the ride? He's there on the buses and the subways too. Looking in through that Broadway window, isn't that Whitman right at our shoulder?  At a pitched-roof frame house, down by the water, isn't that Whitman at the door?  Whitman is New York. He may be known as America's poet, but really, we know he belongs to us. 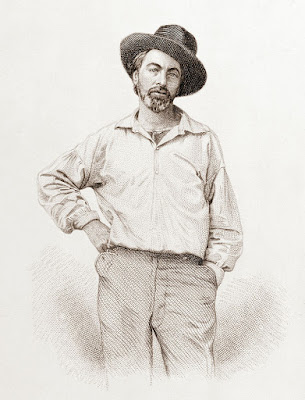 But history has not been kind to the actual New York buildings where Whitman worked and lived.  Most were either demolished or forgotten.  One of the forgotten got a lucky break.

In 1995, Paul Berman, writing for The New Yorker, described the detective process by which Whitman's Brooklyn home of 1855 - the year the first edition of Leaves of Grass was published - was rescued from obscurity.

"... we turned to “Smith’s Brooklyn Directory, for the Year Ending May 1st, 1856,” a sort of telephone book for the pre-telephone age, which did contain a listing for “Whitman, Walter, h. Ryerson st. north of Myrtle av.” In the Brooklyn City Registry, we got hold of a microfilm of the old quill-written title deed to the Ryerson Street house and lot, which was held for a time by Louisa Whitman, Walt’s mother. And, with these several researches in hand, plus the findings of a real-estate-titles searcher who went into the archives to investigate the current deeds and the very arcane history of Myrtle Avenue and its official width (which has in fact changed, by a full twenty-five feet, but only on the side away from Ryerson Street), I can affirm that Whitman’s home from long ago is, today, the address known as 99 Ryerson Street. It is the tawny wooden house in the middle of the block. The one with a top story that was surely added later on. The house with a modern red concrete stoop and a bright-white door."

It's such an exciting article.  What triumph to have found the house, hiding in plain sight for a century and a half.  And a house with such literary pedigree.  But it's still not safe, and the City's record of preserving buildings associated with Whitman is not encouraging. In 1961, the Cranberry Street building where Whitman printed the 1855 edition of Leaves of Grass was demolished, despite a campaign that involved literary luminaries such as Arthur Miller & Marianne Moore.  Late last year the Landmarks Preservation Committee rejected a proposal to landmark 99 Ryerson Street, deeming the house too altered over time, and Whitman's stay there too brief to accord it significance.

While acknowledging Whitman’s significance, LPC cited his birthplace in Long Island and his final residence in Camden as sites that “retain integrity to the periods they are associated with Walt Whitman, and are available to the public to visit.”
Furthermore, LPC wrote, “in the 20th century, an additional story was added to the building and it has been re-sided, substantially altering its appearance since the brief period of association with the Whitman family.” Despite alterations, a bit of the original Greek Revival style doorway is still visible surrounding the front door.

However, the LPC did express an openness to re-evaluation, and Brad Vogel, who spearheaded the landmarking campaign, has not given up the fight.  He has broadened the campaign's support base, and questioned the LPC's "overemphasis on architectural purity rather than on cultural and historical associations — both of which are permissible bases for landmarking under the NYC Landmarks Law."

Last week, the City Council's LGBT Caucus, along with Council Member Laurie Cumbo (whose district includes Ryerson Street) wrote to the LPC to make a case for protecting the building.  Here's the letter.

We are writing to urge you to designate the Walt Whitman House a landmark.

Although altered, this house is one of only two known extant sites (the other being Pfaff’s saloon in
Manhattan), and the only residence, in New York City associated with the great American poet. It is also one of the earliest extant buildings in the city associated with someone who today would be considered an LGBTQ individual.

Walt Whitman (1819-1892), often proclaimed America’s greatest poet, lived mostly in Brooklyn and Manhattan between 1823 and 1862. Whitman was intimately associated with Brooklyn, where he worked as an editor, journalist, and writer, and lived in at least 15 different residences.

Whitman lived in this house between May 1, 1855, and May 1, 1856, with his family, including his mother Louisa, father Walt Sr. (who died here in July 1855), and his four brothers. The Whitmans were the first owner-occupants of the recently completed building.

Whitman lived in this house when the first edition of his epochal first collection of poems, Leaves of Grass, was finished, and published and for sale in Brooklyn in June 1855. It was also while living here that he received his first favorable reviews of the work, which launched his new career as a poet.

Today, Leaves is considered one of the most important American works ever written.

The significance of Whitman and his residence to world culture cannot be understated. Needless to say, as one of the first Americans to express same-sex desire in literature, Whitman has a special place in LGBTQ history and designating the house would help address the dearth of landmarked LGBTQ sites.

Let's hope the LPC listens. Wouldn't it be wonderful to have 99 Ryerson landmarked by this time next year, Whitman's two-hundredth?  Let's keep it standing. What it looks like hardly matters by now, and overly bureaucratic LPC burdens shouldn't be imposed upon its owners.  Buildings change over time, and are imbued with the spirit of each succession of residents.  Whitman is there, but so are all the others who called it home. I swear he wouldn't give a damn about its appearance, but he would love everyone who lived there after him.  It's the heart of the place that matters.

"All architecture is what you do to it when you look upon it." 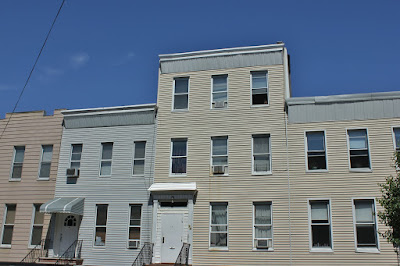 99 Ryerson (above, center)
Posted by onemorefoldedsunset at Thursday, May 31, 2018