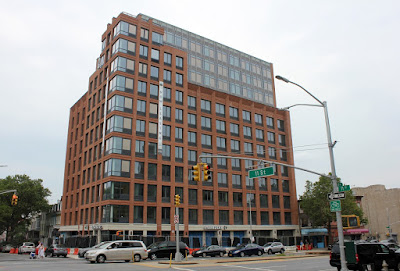 The rental apartment building at 237 11th Street (formerly known by a 470 Fourth address) has been sold.  It was developed by the Adam America/Slate team, and leasing began last summer.  Now it has been bought by Trinity Place Holdings for $81M.

The building stands 12 stories tall and contains 105 units, and leasing started in August, according to Trinity. The residential portion of the building is now about 63 percent leased, and the property includes 6,264 square feet of retail as well, part of which is leased to Starbucks.
Trinity purchased the building from Adam America Real Estate, Slate Property Group and Naveh Schuster. Matthew Messinger’s firm financed its acquisition with a $67.8 million loan, although this has not yet appeared in property records. Trinity did not immediately respond to a request for comment about which institution the loan was from.  (The Real Deal)

I've written a number of posts about 237 11th/470 Fourth, dating back as far as 2014.  Adam America/Slate have been active in the neighborhood, both in new construction on Fourth, & the acquisition of older rental buildings. You can find a few links back here & here.
Posted by onemorefoldedsunset at Saturday, May 26, 2018