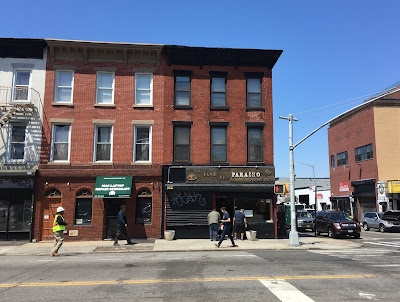 I walked by La Flor Del Paraiso yesterday, to find a man cutting the padlocks on the shuttered store.  When did it close?  A couple of guys stopped to watch the action; neither of them knew why the restaurant had closed.  This was a solid place - good, Mexican/Dominican food, with a great line in roast chicken and pernil.  It was popular with nearby workers and residents alike.  It was one of a number of local restaurants & bodegas that rely on the blue-collar breakfast & lunch trade, and grow quieter (or close shop) by the mid-afternoon.

This part of Gowanus is in the Industrial Business Zone. It's supposed to be excluded from the proposed Gowanus rezoning, but it's still under development pressure. Around the corner from La Flor Del Paraiso, most of the industrial businesses on the northern side of 12th from Third down to Hamilton 'Walentas' Plaza are either for sale or up for rent.  And the area is is nudging into industry-lite. At the edge of the business zone, diagonally across from the restaurant, on the NE corner of Third & 12th, a six-story, mixed-use apartment building is going up, and across from La Flor an industrial building conversion is underway, with The Yard co-working portion of it already open & a CrossFit gym one of the future amenities.  Well within the business zone, on 14th between Third & Second, a large office building is rising.  On Third, retail spaces continue to go steadily upscale.  If you walk this part of Third today you're as likely to find a petal-strewn sidewalk or a pair of vintage jodhpurs as a flat fix shop or a grocery store.

It remains to be seen if Jed Walentas is aiming to get the Hamilton Plaza/Lowes properties rezoned residential.  In a recent Brooklyn Eagle article, an (unnamed) real estate exec suggested that this was likely.  Brad Lander's response was emphatic.

Not so fast, said City Councilman Brad Lander (D-Gowanus), who told the Eagle that he would fight Two Trees if it seeks a zoning change to allow for residential development.
“As long as I am Councilmember, there will be no residential zoning in Gowanus’ Industrial Business Zone,” said Lander, who won’t be in office after 2021, thanks to term limits.
Lander said he has been “crystal-clear with all stakeholders” that he opposes residential development in the Industrial Business Zone, though he said he is open to a “job-generating project” on its property, especially one that creates manufacturing and light industrial jobs.

If Walentas/Two Trees has other plans for the canal-side properties, such as a last-mile delivery center (Amazon-style), will this be an appropriate project? We'll have to wait and see how this plays out.

In the meantime, a song.

Posted by onemorefoldedsunset at Wednesday, May 02, 2018