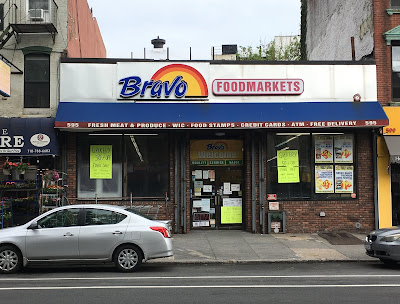 At the end of last year I noticed that the Bravo supermarket space was up for lease.  Bravo has remained open since then, but will be closing at the end of the month. The owner of the store is retiring, and there's no word on what business will be coming in next.  I doubt it will be a supermarket.

Bravo is a New York-based company. Most of its stores are in the New York area (especially Brooklyn & Queens) and in Florida. It caters especially to Latino shoppers. There are a couple of other Bravos not too far away in Sunset Park.  But with the area ever more wealthy and white, with rents increasing and land turned over for development, this kind of mid-sized market is vanishing.  Emporium, at Fifth & 7th, is still around, and has shifted a little to cater to newer shoppers; the hot lunch table has gone and some of the items are slightly more upmarket.  But it's still a regular, unpretentious kind of store, still skewed towards an older, less affluent, residential base.

The shelves are starting to empty at Bravo.  All the packaged items are selling at a 50% discount - an excellent deal for thrifty shoppers and those on a budget.  But you'll carry your bargains home with a heavy heart.
Posted by onemorefoldedsunset at Friday, May 18, 2018