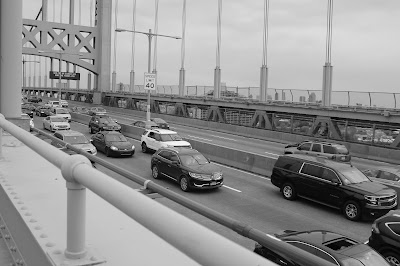 I just missed a shot of the Food Nation truck.  While some spot birds, it seems my fate's to look up to the sky & catch Food Nation as it slogs along the BQE/Gowanus, & here it was again, but this time on the Triborough, almost at eye-level.  Was there a message here?

Back on Randall's Island I took perverse delight in catching a glimpse of the Moses lair. 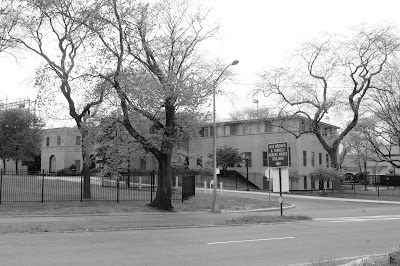 With his power, Robert Moses built himself an empire.
The capital of this empire was out of public sight - a squat gray building crouching so unobtrusively below the Randall's Island toll plaza of the Triborough Bridge that most of the motorists who drove through the toll booths never even knew that the building existed.  And most of them were ignorant also of the existence of the empire.
But those whose interest in geography centered on the map of power knew of its existence very well. They realized that although theoretically it was only a creature of the city, it had in fact become an autonomous sovereign state.
Robert Caro, The Power Broker

This week's New Yorker Radio Hour features Colm Tóibín interviewing Caro.  It's a superb interview with Tóibín urbane & insightful, & Caro discussing his two biographical subjects - Moses & Lyndon B. Johnson - with a storyteller's art.  Caro's pleasure here is evident - "best interview I've ever had," he remarks at the end.  A big part of the listener's pleasure lies in Caro's voice.  For me it's the voice of the city itself.

Posted by onemorefoldedsunset at Tuesday, May 08, 2018