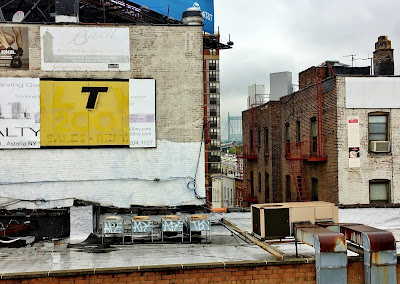 I'd stood upon the elevated platform at Astoria Boulevard heaps of times but never saw the narrow slice of landscape where the bridge appears until the other day. And I wouldn't have seen it then unless it was pointed out to me.  There it was, in faint blue, wedged in with traffic lanes, three rowhousess, a strip of modern windows & a brick red fire escape.  It's easy to miss with all the visual mayhem going on - the limbs & skywards arrow, & the APE APE APE. And loudest of all the Realty 2000 T .  You're a kid on a sugar rush as your eyes zoom around the canvas, but if you can slow things down you can look more peacefully at ducts and vents and chimney tops and the soothing side of the apartment building -soft and brown and restful.  And then you're on the move again.

Posted by onemorefoldedsunset at Monday, May 14, 2018