Here's another look at the north side of  Prospect Avenue - between Third & Second - a block that vanished with the construction of the Prospect Expressway, around 1941.  The pictures, taken in 1940, document a block's last stand. 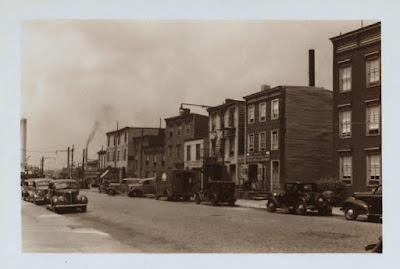 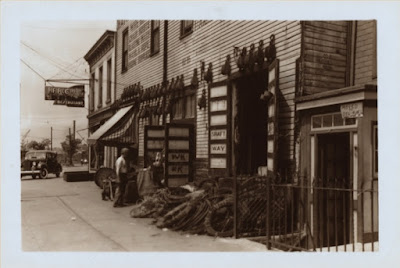 You can see a bar down at the corner where Prospect meets Hamilton (89 Prospect), and the building right next to it (91 - 93) is indicated on early maps as a metal works (1903), and Siphon Head gas manufacturers (1904), and is later reported as housing a paper company.  It's hard to make out what business is in place in 1940. 103, the smaller, white building, at center (top), once housed a blacksmith's shop, and Alexander Barnett's shop at 107 (marine supplies, scrap metal, manila rope), which has made an appearance on this blog before, can be seen second from the right in the same picture.  On the 1880 Bromley map, the block faces the Heisenfuttel & Nelson Coal Yard, and the South Brooklyn Saw Mill, situated close to the point where bay meets canal.  By 1903, there's an iron works nearby, & right on the bay, the huge Buckley, Woodhull & Burns Lumber Yard. 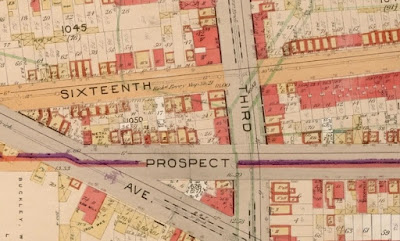 
Press reports summon brief, flickering moments of Prospect life from earlier centuries: the theft of a diamond ring at no.89, the vagrant found dead in the yard at 93, the resident hero at 99 who saved a group of children from a runaway horse.  A fall from a window.  A bite from a dog.

Mr Rosenfeld:
I want $200, or your house will be blown up at midnight.     BLACK HANDS
I want the money down the Bricks on Hamilton av. and 2nd. av.

It did not specify just when he was to pay the $200, nor just what hole it was to be put in, except that he was to pay out his cash down by the brickyard at the junction of the two avenues, down by the gloomy shores of the Gowanus Canal.  (Brooklyn Daily Eagle)

Posted by onemorefoldedsunset at Friday, August 21, 2015