Banned Developer Shiraz Sanjana Back in Action at Sixth & 21st 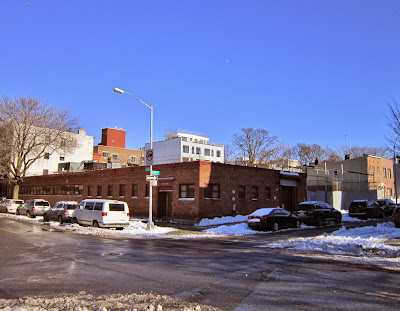 Hardly cheering news. The Real Deal (via the Daily News) reports on the return of banned developer Shiraz Sanjana, now back in action at the corner of Sixth & 21st.


The developer, banned from condo sales in 2013, picked up a development site in South Slope, Brooklyn, with plans to build a condo on the property, the New York Daily News reported.
Sanjana bought the one-story site at 695-705 Sixth Avenue from Yeshiva Machzikel Hadas for $9.9 million. Plans were filed for the site in April by an LLC for a three-story, 32-unit, 34,623-square foot residential building designed by Karl Fischer, according to New York YIMBY.

Along with his partner Joseph Scarpinito, Sanjana was banned from developing condos and co-ops by the New York Attorney General’s Office, which accused them of making false filings to the office, and of extensive construction problems at their eight-story condo development at 161 East 110th Street.
Sanjana’s 16-month ban expired in April.

I've been watching the goings-on at 695 Sixth for a while, but had no idea about the sale price, which was not recorded on ACRIS, and I was not aware of Sanjana's history.  Here's a little intro to our new developer neighbor.

Homebuyers at the Mirada (East 110th) complained to the Attorney General’s office about pervasive water leaks and construction defects in their brand-new building, and that the developers failed to obtain a permanent certificate of occupancy from the City’s Department of Buildings.
In the course of the investigation, it became clear that Scarpinito and Sanjana have participated in an elaborate ruse intended to defraud homebuyers – a ruse that was facilitated by their lawyer, Gruber. Scarpinito, Sanjana and Gruber submitted at least nine false filings to the Real Estate Finance Bureau in their attempt to skirt their obligations to deliver completed apartments to homebuyers and conceal the developers’ identities. They concealed their identities to avoid disclosing Scarpinito’s fraud conviction, as is required by law. The fraud was also an attempt to walk away with $3.2 million of purchasers’ deposit monies, and pin all liability on Scarpinito’s 83 year-old mother, Nancy Scarpinito, who was listed as the sole individual controlling the developer of the Mirada in filings with the bureau.  (Attorney General's Office)

Demo plans at 695 were filed in June, and new building plans are still to be approved.


Posted by onemorefoldedsunset at Friday, August 14, 2015

same as it ever was!

Does anybody controls these developments regarding the good health of people living in surrounding buildings?
I am really worried about this one, because my windows face the yeshiva school roof and if this development takes place I will have to live with my windows completely closed for years to come .
Never mind my sunlight and clean air will go gone for good.
I am so so sad.
I have been living here for 15 years and it was paradise

bluet:
Yes, these situations are a nightmare. As a direct neighbor, the developer is obliged to give you notice of any demolition/construction work, and access to building plans, but this doesn't always happen. It's definitely worth going on to the Department of Buildings website regularly, to keep abreast of what's going on at the site, and to find out as soon as possible what plans/other actions are being filed. I would also suggest going to your local representatives (council, assembly, etc.)for help, if issues arise, and to call 311 if you experience problems/notice irregularities &/or unsafe conditions. We have found Jim Brennan's office on Seventh incredibly helpful, but I'm not sure who your assemblyman is. Good luck - let me know how it goes. I know that there has been very strong community involvement in the past in response to development in the South Slope/Greenwood area - it would be great to see this re-invigorated.