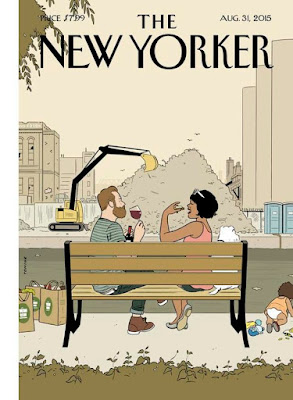 Sales at Fairway Suffering at the Hands of Whole Foods & the Like? (Gothamist)

Inside H.P.Lovecraft's Hatred for Brooklyn (Bowery Boys)
A look at the author's racist & obsessive loathing of the Brooklyn waterfront & its inhabitants:

"As for Red Hook—it is always the same. Suydam came and went; a terror gathered and faded; but the evil spirit of darkness and squalor broods on amongst the mongrels in the old brick houses, and prowling bands still parade on unknown errands past windows where lights and twisted faces unaccountably appear and disappear. Age-old horror is a hydra with a thousand heads, and the cults of darkness are rooted in blasphemies deeper than the well of Democritus. The soul of the beast is omnipresent and triumphant, and Red Hook’s legions of blear-eyed, pockmarked youths still chant and curse and howl as they file from abyss to abyss, none knows whence or whither, pushed on by blind laws of biology which they may never understand. As of old, more people enter Red Hook than leave it on the landward side, and there are already rumours of new canals running underground to certain centres of traffic in liquor and less mentionable things."

from The Horror at Red Hook

Posted by onemorefoldedsunset at Tuesday, August 25, 2015