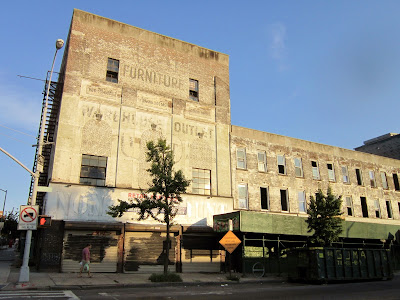 The other day I was thinking how quiet it seemed at the old Frost warehouse. I couldn't recall when I'd last seen any actual construction work going on there. In fact, as I later found out, work stopped in March, when sprinkler & gas violations were issued.

FULL STOP WORK ORDER ISSUED. WORK W/O PERMIT. INSPECTION TIME 4:15PM AT ABOVE DATE AT TIME OF INSPECTION I OBSERVED SPRINKLER PIPE SHUT OFF AT THE MACH VALVE & CUT OFF & REMOVED IN THE CELLAR.NO SPRINKLER

At 665, a Stop Work Order partially rescinded only for the provision of guard rails & lighting, & the removal of debris:

657 - 665 were sold in September, 2013 for $8,500,000, and plans were filed last year for a 30-apartment residential/retail conversion. At the time of the sale, CPEX's Sean Kelly called the sale a potential "focal point for the South Slope market."

“There is not much left of Fifth Avenue in Park Slope-proper and the natural progression is south ... The buildings are in excellent condition, and there is not another 10,000 square foot footprint available for at least 10 blocks...This project will be a game changer for the neighborhood.”

The managing member of the LLC that purchased the building is Chaskiel Strulovitch, lauded by Crain's New York back in 2011 as a pioneer - one of "Brooklyn's Miracle Makers" in the early development of Williamsburg:

Mr. Strulovitch is one of a handful of people who laid the groundwork for the transformation of a gritty, postindustrial wasteland in the city into a thriving residential oasis chockablock with towers and hipster hangouts.


Posted by onemorefoldedsunset at Wednesday, August 19, 2015