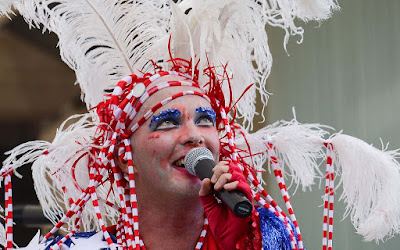 
I'd only seen Taylor Mac before in intimate, cabaret settings. Prospect Park was rather different, with a crowd who were, on the whole, crunchily, unironically normcore. And Good Lord, all those little children! For the first section of the show, the crowd was .... what? Muted, shy, confused, disengaged? Not sure what to make of the fabulous? I wanted to kick them. But the Mac magic roused them in the end. They came around as much as you might hope for in Park Slope. The chorus line of strippers titillated, & the Brooklyn Marching Band, a riot of rhythm and motion, woke the woozy concert-goers into a roar of applause.  They were fine, bracing fare.  But Taylor Mac, Taylor Mac. What a bravura show of music & deconstruction, cajoling and reprimanding, wooing and teasing that crowd to get it.  And he did it.  By the end of the show, he had conjured up an audience.
For me it was all about Mississippi Goddamn.  I'd just seen What Happened, Miss Simone?, earlier in the week, with footage of a raw, heartbreaking performance of the song, and Taylor's Mac's version did Simone proud.  A stark, accusatory, scream of beautiful indignation rising up, up, up, into the night.
It's nowhere online, so I went back a century to another, smaller, song from the History, Gilbert & Sullivan's See how the Fates their gifts allot.  There's a quiet sting there too.


Posted by onemorefoldedsunset at Sunday, August 02, 2015