Fifth Avenue in the 60s is a sleepy kind of stretch.  From Our Lady of Perpetual Help south, the avenue dips down in height.  Is this The Ridge?  The foot traffic is quieter than the bustling pace of the 40s and 50s, and the side streets between Fifth and Fourth (62nd, 63rd, half of expressway hacked 64th) are the uniform barrel fronted rowhouses common at this end of Sunset Park.  They're pleasant, attractive blocks, but a little on the staid side. 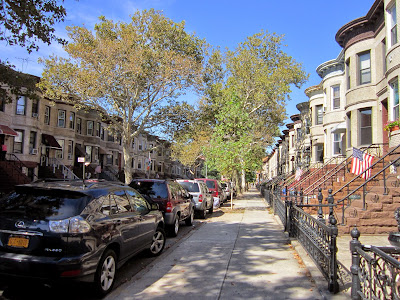 (I realize that as I've walked through Sunset Park, I haven't paid that much attention to the stores and other buildings on Fifth, the main commercial artery of the neighborhood. This is pretty ironic, as I'm on the avenue regularly, and have a good number of photographs that I've accumulated prior to this systematic journey.  When I turn around and head back north (Fifth to Ninth) I'll remedy this.) 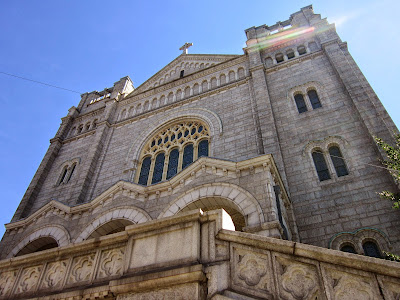 The cathedral-like Our Lady of Perpetual Help


Between 62nd and 63rd on the eastern side there's a good assortment of business, with Feeney's pub right next to Plaza Xochimilco food center (some beautiful Mexican pottery here), and the Asian Women's Empowerment Center a few stores down.  All Kinda Furniture is on the block too, though it was closed when I walked by.  The Last Stop grocery holds a 63rd Street corner with a name that I guess signifies the break in the run of stores on the avenue.  Not that hopeful sounding though. The plumber's across from it has a great old window. 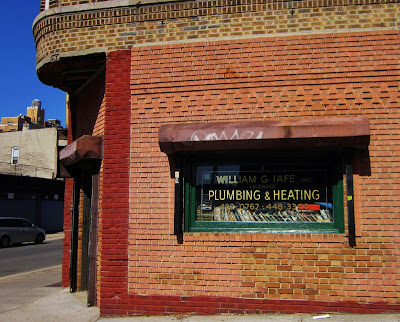 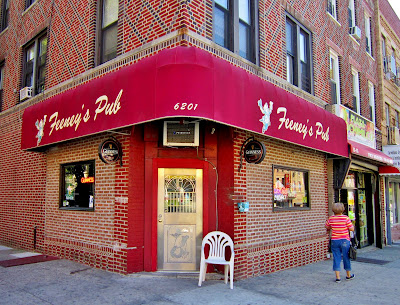 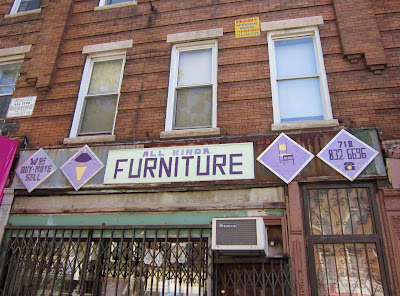 A block south, a trio I like.  The untouched facade of "God is Good" Rising Sun Alarms is fine and intact, unlike the ones it's sandwiched in between. 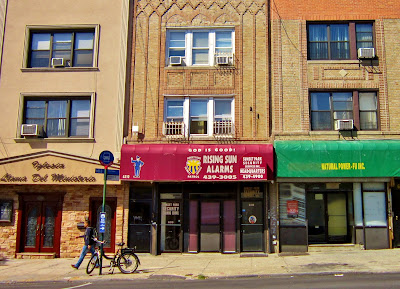 If you head down to Fourth Avenue at 63rd, you can see the Zion (Norwegian) Evangelical Lutheran Church, which was founded in 1908, and closed in January. 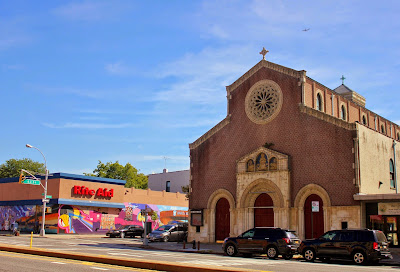 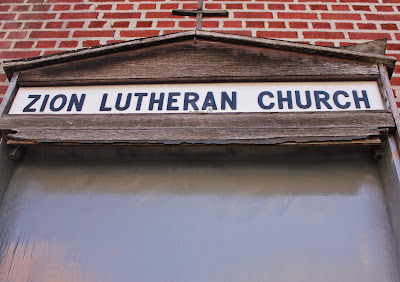 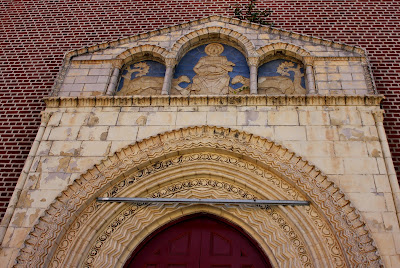 Peter Ellertson, grandson of church founder Pastor Johan Ellertson, writes about the last service here, and you can catch a glimpse of the church's interior.

Across 63rd from Zion, a Rite Aid has acquired a lurid Brooklyn mural which features (ugh) Barclays Arena.  God & mammon side by side. 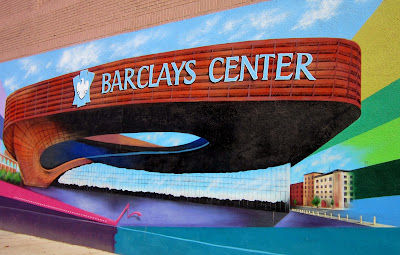 Final border shots. Fourth & 65th, there's a deli with a name I like a lot, 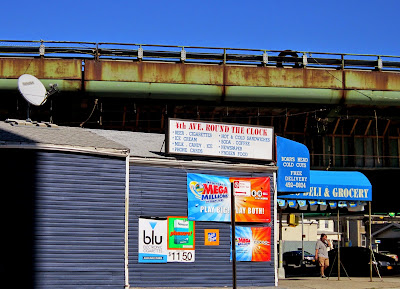 The Fourth Avenue substation, completed around 1915, which is next to a smaller, more recent Tower, Bay Royal Towers! At eleven stories, it's more of a towerette really. 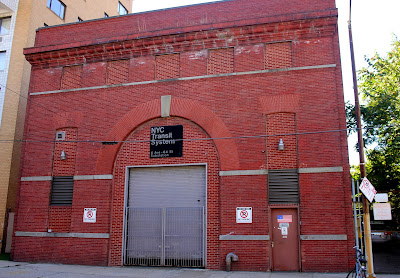 And an avenue east, looking at the tracks from Fifth, 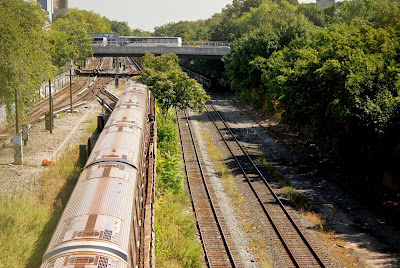 Note: And to throw into the thorny debate of Sunset Park borders, a couple of lines in Robert Caro's The Power Broker (1974) mention "what they (local families like Cathy Cadorine) thought of as "Sunset Park" - the area extending from west of Third Avenue all the way to Eighth and from Thirty-sixth Street south to Sixty-third."  That sounds about right to me.  From conversations with long-term residents from Prospect Avenue through the low thirties, I've found none of them identifying themselves as Sunset Parkers.  But this issue will never be resolved.  The borders may be marked by track or highway, or by other natural or man-made landmarks, ordained or reinvented by government official or realtor, but they also exist in our footprints, our memories, the day-to-day routes we travel to shop and eat and drink, the comfort of neighbors, & the myriad of small, intangible markers that map our home in the world.


Posted by onemorefoldedsunset at Wednesday, October 01, 2014