Slate, a newish spin-off from Silverstone Property Group, is also busy buying up multi-family rental & mixed use buildings in Brooklyn & Manhattan.  A Real Deal article in April referred to a two-year, half-billion dollar strategy of acquisition. One of these acquisitions is 310 12th Street (also mentioned here before), a twenty unit rental building acquired in April for $5,750,000, with a business plan of "Value Add /Reposition / Unit Conversion".  They certainly don't seem to be wasting any time in their efforts to turn units over, with little concern for longstanding tenants, and nothing on offer for new renters of moderate means. New rents have increased dramatically, though apartments seem to be renting more slowly than they'd hoped. A three bedroom apartment initially listed in August at $3,850 per month was listed for rent at $3,195 by October, and a two bedroom rental was reduced from $3,550 to $3,183.  Of course these are "net effective" rental prices, offered with one or more months free, so the real monthly prices are three hundred dollars or so higher.

Right now there's a stop work order in place, for work contrary to plans. There are permits in place for work on two apartments in the building, but plans submitted in July for remodeling a third, ground floor apartment & connecting it to basement space were disapproved.  What the hell though, a lack of a permit didn't matter, and work at 1Lwent ahead anyway.  Time is money and money is all that matters. 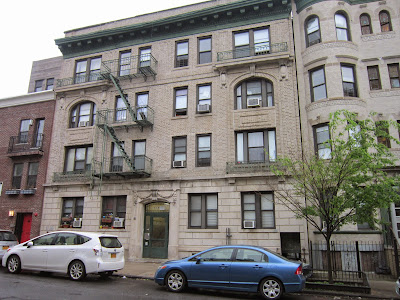 
Posted by onemorefoldedsunset at Monday, October 27, 2014