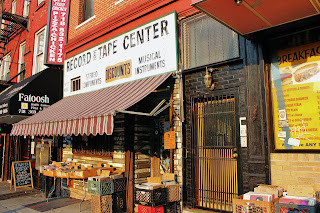 Earlier this year news got out that the Record & Tape Center at Fifth & 9th - on Fifth for almost fifty years - would be closing in August.  Turns out this was a little premature, as the store is still open and will continue to operate until at least the end of the year.  After that, who knows?  Maybe there'll be a new lease negotiated, or maybe that will truly be it.  The Center almost lost its lease in 2009, and was planning a move to a store up the block, when a deal was struck at the last hour.  Though the owner, Tony Mignone, had talked of retirement back in July, I'm harboring hopes that there'll be a change of heart and a landlord ready to keep the venerable store in business.  This is a landmark on the avenue.


Posted by onemorefoldedsunset at Monday, October 06, 2014