480 Fifth, home to Dreamy's Mattress, seemed to have been on the brink of change for some time.  In late 2013 it was listed for sale at $6,200,000, but was quickly taken off the market. In July I noticed For Rent signs at the store.  Over the last couple of weeks the mattresses were hauled away & the brown paper went up on the windows, and shortly after that I saw clothing fixtures & plastic covered-suits being carried in.  Today - the new sign! 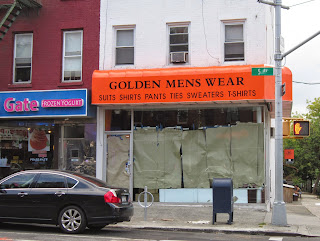 This doesn't look like a hipster-haven, or an upscale boutique for someone who just spent a couple of million on a frame rowhouse.  In fact, it looks like the kind of store that was around on Fifth thirty years or more back, albeit with a more modern facade.  A store you'll still find on Sunset Park's Fifth, or on Ditmars Boulevard, or Kings Highway, or Roosevelt, or any number of more moderate income shopping strips throughout the city.  But not coming in on high rent South Slope Fifth.
Good luck to Golden!  Still, I'll miss the Sleepy's/Dreamy's symmetry of the block, and neither Dreamy's or Golden Mens Wear can match my old favorite, Queen in Bazaar, which was there at 480 when I first moved here in the 80s.  See it below, woken briefly from its slumbers back in 2010. 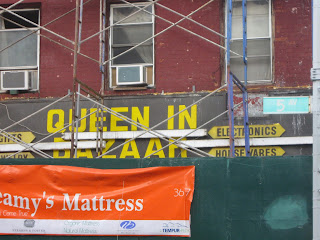 Posted by onemorefoldedsunset at Thursday, September 11, 2014