On Fourth between 61st and 62nd the Fountain of Salvation storefront church is closed, and the premises are up for rent.


61st Street between 5th & 4th is almost entirely four storey apartment buildings.  Even though that's not particuarly high, building-wise, its uniformity, combined with its utterly leafless sidewalks, give it something of a canyon feel.  One block down, A Sunoco station and a variety of housing styles mix things up a bit. A bigger apartment building anchors the north-west corner, and the apartment building run down the southern side is a lower three storey.  On the north side, bay-fronted frames, and barrel-fronted brick.  A tree or two.


Turning at onto Third there are flowers and trees, and considering you're right next to the Gowanus Expressway, swerving down and eastward, it's kind of pleasant, but ha! there'll be more nature ahead.  Turn up 62nd, and you'll see it clearly belongs with the 62nd street across Third.  Here the houses are semi-detached, but like 62nd between Third & Second, they're clearly of much more recent vintage than other housing nearby.  A commenter speculated that the Second/Third block might have been built as army housing, connected to the terminal, and maybe the Third/Fourth block has a similar connection. 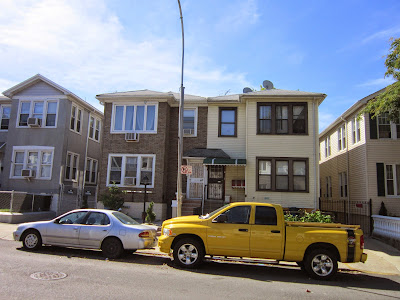 Closer to Fourth, the brick housing is a little older. I was pleased to spot another vivid green "mystery" business around this part of the block. This will make number three in my collection! Online Simplemente Lo Mejor seems to be registered as a restaurant .. 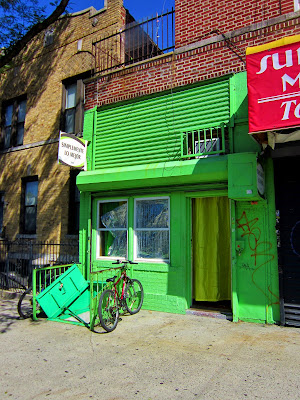 The modern PS 971 takes up the corner of 63rd & 4th.  Down the side of an apartment building opposite the school, catch a glimpse of Tower of Bay Ridge West & expressway. 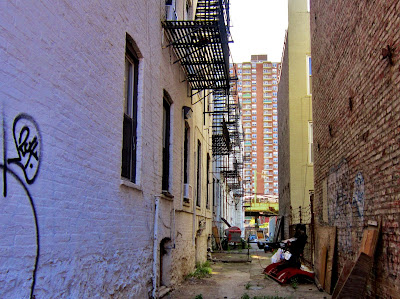 63rd is lined with more small apartment buildings, and one business, Sun Auto Center, at the bottom of the block. No left turns here. So I'm forced to head up 63rd again, I think (wrongly). 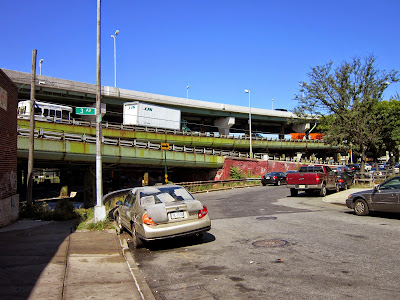 The Fourth/Third blocks from 62nd to 64th get progressively smaller as the Gowanus heads east, and 64th on this side of it is barely a block at all, though there's also a small piece of it on the other side of the expressway. I realize that I've missed that tiny piece of Third & 64th out - I'll have to come back. Damn it! On this side, 64th consists of one multi-unit apartment building (pharmacy below) and under the highway some roadwork supplies. But right at the end of this little street there's a wonderful surprise: the 63/64 Community Garden!

For years before the 63rd & 64th Streets' Block Association in Bay Ridge, Brooklyn was created, the land was a garbage strewn, rat infested eyesore ... Tenants of the adjacent building, frustrated and fed-up by the crime in the community decided to take back their right to a safe neighborhood. Maureen O’Boyle and other residents contacted the community board and assemblyman to help track down the owner of the property, the Department of Transportation. The DOT was delighted about a beautiful green space and even assisted with the efforts by providing a dumpster and fencing in exchange for active community participation in maintaining the site. In the 5 short years since the garden was formed, 63/64Garden has blossomed from a few garden members to a widespread membership that reaches out to hundreds of people in the local community through partnerships with local-non profits.

The Green Thumb identifies the garden as being in Bay Ridge, not Sunset Park, and frankly, I think it might have been better to stick to the old Brooklyn/New Utrecht division at 59th, but whatever the neighborhood, this is a beautiful garden, with maybe the most unlikely location to experience nature that you could imagination.  Even with cars roaring at its borders, flowers trump Moses. 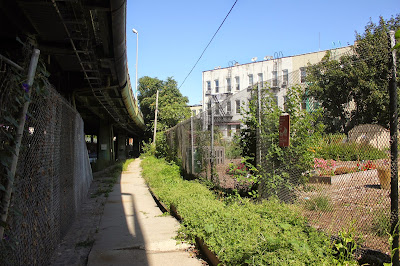 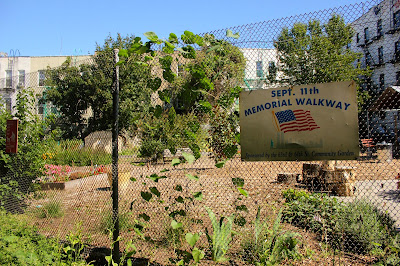 The block long Walkway, maintained by garden members, connects 64th back to the sidewalk of Third & 63rd. 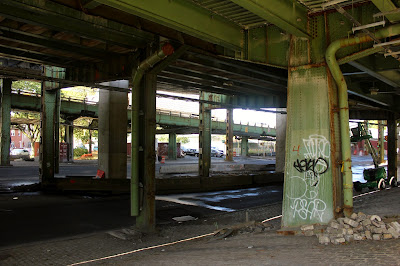 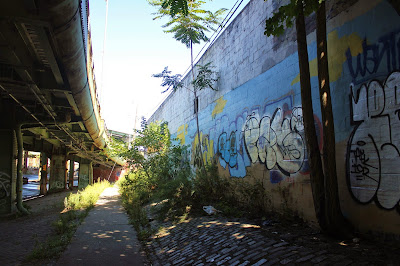 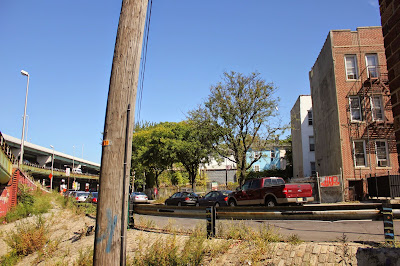 Here's a photograph of 64th between Third and Fourth, in 1962, looking towards the site of the current community garden. 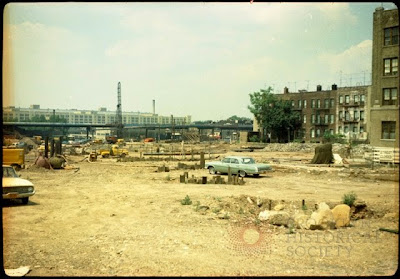 
Posted by onemorefoldedsunset at Thursday, September 25, 2014