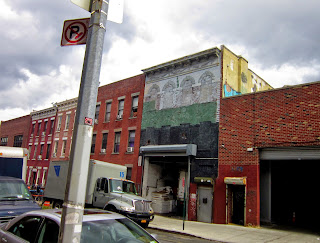 South of Lutheran, it's back to a mixture of residential & industrial below Third.  And at this point south, the names shift.  Sunset Ridge Deli (on Fifth at 58th), 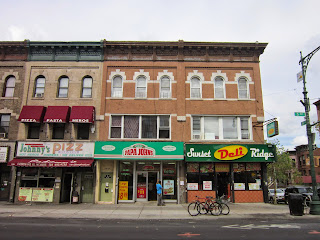 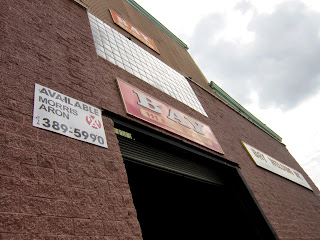 Bay Ridge Ford (59th & Second), Bay Ridge Tile Inc. (Third & 60th),  Ridge Glass & Mirror Works (60th & Fourth).   We're at the border.  And right at the edge of the Brooklyn/New Utrecht line.  As a walker not a historian, I'm confused about this, but have seen it variously described as 59th or 60th Street.  59th between Second and Third, above the Army Terminal, certainly seems like an urban divide. 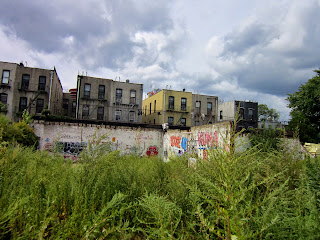 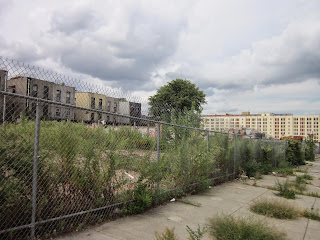 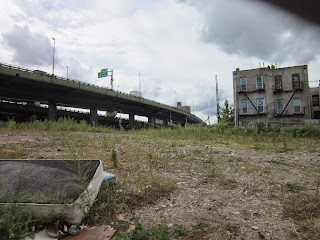 The building at right (above), is the one I saw on the B37 back in July, at a different angle. You can see its ghostly clothing business sign here.  Who knows what plans are afoot for this large tract of wasteland?

Across from this empty land on 59th, and taking up a whole block, is a beautiful old building, a Brooklyn City Railroad Railroad Company property (1892), which may have been used as stables or a carbarn. 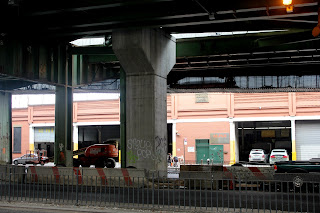 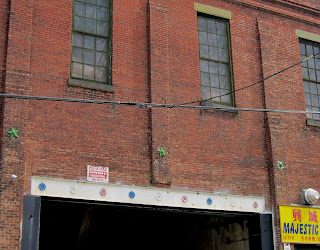 You can read more about the building & the B.C.R.R.C. in an excellent Forgotten New York Third Avenue post here.

Even though I love walking around here, I certainly won't miss the dash across the avenue under the expressway as I've wended my way south.  It must be hell to cross it every day. The traffic lights are not kind to pedestrians, and photogenic though it may be, it's miserable and forbidding territory.  I wish I had seen Third before Moses got to work on it.  In the Forgotten New York post mentioned above, there's a beautiful quote from Robert Caro's The Power Broker (1974) that describes the then-and-now:

The heart of the neighborhood — the focal point that gave it unity and a sense of community — was Third Avenue. Lining it, along with newsstands off which 9,000 Nordisk Tidendes were sold every day, were seven movie theatres, dozens of tiny restaurants run by couples and featuring recipes from the old countries … and scores of small, friendly “Mama and Papa” stores (the Northland Gift shop, the Finnish Book store, a hardware store that looked like a general store out of the Old west, a butcher shop that raffled off twenty-five big turkeys every Christmas) that occupied the ground floor of three- and four-story brickfronts in which Mama and Papa lived upstairs with the children…

The El had cast a shadow over Third Avenue, but the El had been forty feet wide. The Gowanus was ninety-four feet wide. Its shadow was more than twice as broad.
And more than twice as dark. The gaps between railroad ties had made the el’s shadow a Venetian-blind shadow; sunlight had come through as if through the slats of an open blind. A highway was a concrete slab, without gaps. The construction of the Gowanus Parkway, laying a concrete slab on top of lively, bustling 3rd Avenue, buried the avenue in shadow, and when the parkway was completed, the avenue was cast forever into darkness and gloom, and its bustle and life were forever gone.

Posted by onemorefoldedsunset at Friday, September 12, 2014