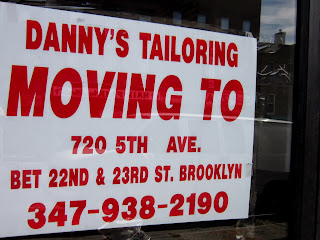 A couple of weeks ago I noticed that Hair Fair by Alberto was moving across the street, to the retail space occupied by Danny's Tailoring & Dry Cleaning.  One of the women working at Danny's said that they would be moving to a spot close by.  It turns out they're heading two blocks south, to 720 Fifth.  This was formerly part of Guerrero Food Center, the other part of which is now (the smaller) Puebla de Los Angeles.  This is the end of a continuous Fifth Avenue shopping strip running all the way from Flatbush Avenue.  It picks up again in the high 30s, at the other end of Greenwood Cemetery.  I'm happy that Danny's has managed to stick around.


Posted by onemorefoldedsunset at Thursday, September 04, 2014