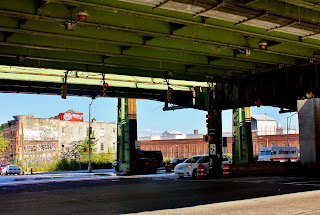 By 60th Street, it was time to get Third Avenue crossings done with.  I headed west of Third & walked the Third/Second blocks as far as the Towers of Bay Ridge at 65th Street, by which point the expressway had split in two - Gowanus & Belt - and Third was free again!  The Fifth to Third blocks would be walked later.
Again I find just how different the identities of neighboring blocks can be.  On 60th, a row of fire-escapes seem to cage in the worn apartment buildings they grip onto.  This is a mixed-use block, with businesses like Quickly Done auto repair, Magical Years nursery daycare, and The Meat Club, shouting out its name in fat blue-on-yellow letters. 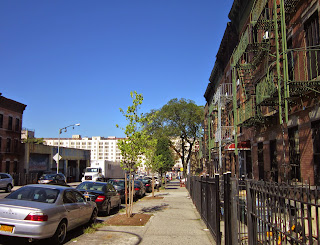 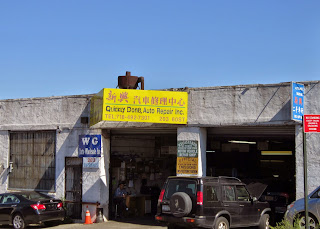 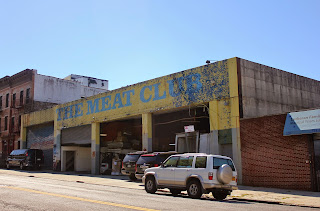 Turn into 61st and you might as well be in Bay Ridge already. This is the most bucolic & quietly prosperous block I've seen in all my walks between Third & Second . Yellow-bricked, round-bayed rowhouses line each side of the street.  There are tall trees & lush pocket-sized front gardens. Roses grow.  It feels like closely guarded territory - oasis and fortress all in one.  On 62nd, more recent, detached homes (40s?) look like nothing else I've seen around here, as suburban as you'll get west of the expressway.  A proud, neatly kept street with a flag in almost every yard, and cars pulled up in driveways.  A street of shrubbery. A street of rational dreams, achievable goals, and steady, incremental progress.  I'm getting ready to turn around and head back in the opposite direction. 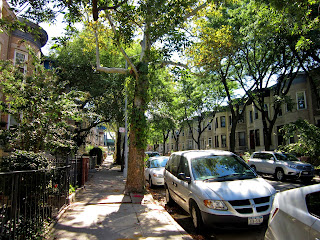 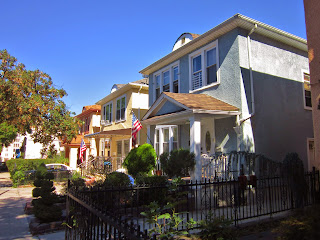 Posted by onemorefoldedsunset at Friday, September 19, 2014

That block on 62nd is one my favorite hidden gems of Brooklyn. I've always assumed that the houses were originally Officers quarters for the Army.

Thanks - I bet you're right about a military connection. What an interesting corner!