The Disappearing Face of New York 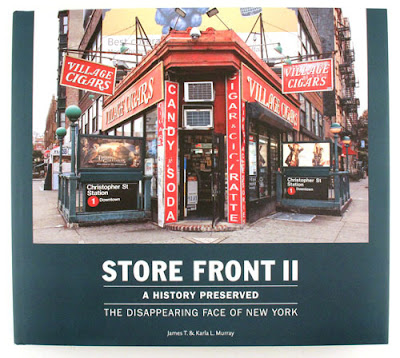 A few weeks ago I was given a copy of James and Karla Murray's latest book Store Front II: A History Preserved, a follow up to Store Front, which was first published in 2008.  The books pay tribute to the small, independent, family-run & rapidly disappearing businesses of New York City, with page after page of glorious images. Some of the photographs show businesses anyone even briefly acquainted with the city would know, while others are landmarks only in their own neighborhoods. Some of the businesses have been in the same family hands for generations, while others have been handed on to other guardians.  All of them are beautiful - dressed up in neon, inscribed with swirling, hand-painted fonts, or announcing their identities with neat rows of three dimensional plastic lettering. Worn by decades, perhaps the neon sign no longer illuminates, the paint is faded, or a letter or two, or three, or four, is lost.  They're no less lovely for that. 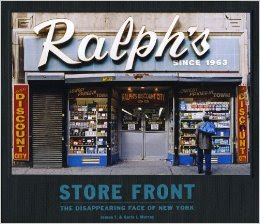 You'll find your own favorites immortalized here, and you'll see others you want to know better.  I was especially excited to see Dyker Heights bakery St. Anthony's.  I have my own pictures of more than a few of the stores in the books, though they're nothing in comparison to the Murrays' work.  On the local front, Timboo's, Luigi's, Garry jewelers, the Record & Tape Center, and Eagle Provisions are represented here, both in photographs and text.    Luigi's Giovanni Lanzo talks of the family farm in Staten Island, & the identity of that No Man's Neighborhood sandwiched between Park Slope and Sunset Park.  Garry's Michael's Garafola remembers a block by block neighborhood of Irish, Italian, African American, and Puerto Rican families.  Anthony Mignone, owner of the Record & Tape Center, looks back at a presence on Fifth dating back to 1965, and envisions a forced retirement when his landlord takes over the space. One of the Eagle Zawisny brothers, Richard, describes tougher days on the avenue, with the Mafia active on the scene, and remembers morning walks from his car to the store, meat cleaver firmly in hand.  Sadly, three of these businesses are no longer operating.

With their photographs, and the beautifully written prose that accompanies them, the Murrays remind us how important small businesses are to our lives in the city.  How they anchor communities, enrich street life, and mark the history of the waves of immigrants who have made New York their home. They're why we love to live here. Sadly, many of the stores you'll find in the books are no longer with us - a consequence of rising rents, lost leases, changing demographics, or the end of a generational shopkeeping line.  Chain stores sweep in to take their place.

If you care about the future of small businesses, and you'd like to do something to protect them, visit #Save NYC, & see how you can help.  One of the steps you can take is to sign the petition for the Small Business Jobs Survival Act, which would allow commercial tenants to negotiate fairer lease renewals.

And of course, treat yourself to your own record of the city's marvelous retail legacy.  Buy the books!

Posted by onemorefoldedsunset at Thursday, February 25, 2016

This review: What a wonderful, if not a bit sad and inevitable feeling, testament to your love of the greatest city!

Thanks! The books are really beautiful, though they are, inevitably, tinged with sadness, as by the time of publication, some of the businesses pictured in them are already gone. Happily, there are still many wonderful stores left in the city & I have many favorites (not all of them old)! But the climate is not favorable for small retail businesses.
St. Anthony's Bakery in Dyker Heights is a wonderful place. Inside there's a painting of the home town in Sicily, and a shrine to the patron saint. Behind the shop there's has a massive old coal-fired oven. Lovely, lovely owners.
And yes, still the greatest city!