Every so often I walk this way with the dog.  As he heads towards middle-age, he's becoming more opinionated, stubborn about where he wants to go, and inclined to dig in his heels & try to resist the routes he doesn't like.  He's also taken a liking to hanging out on benches - in parks, on sidewalks, anywhere where he can sit and watch the scene.  I think he'd be sitting with the older crowd on one of those Bagel Factory benches on Fifth given half the chance. He especially likes to sit on a bench right here, idling in front of the canal.  Yesterday he wouldn't budge from it, and I had to pick him up and force him to move on with a few firm shoves.  Last time I'd been down here with him, a couple of months back, a couple of guys were preparing the billboard for a new ad., a replacement for Bulleit. Today we saw the next product. A Third & 3rd Whole Foods special. 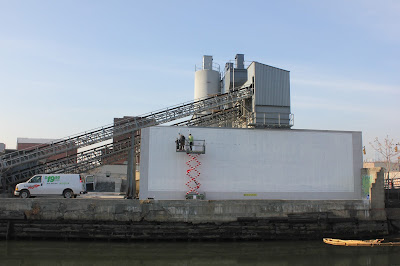 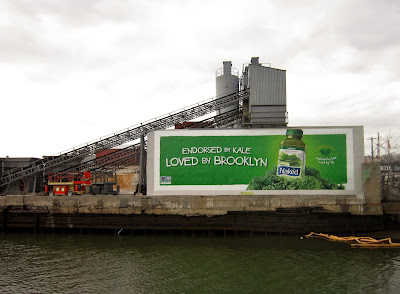 Posted by onemorefoldedsunset at Friday, February 12, 2016