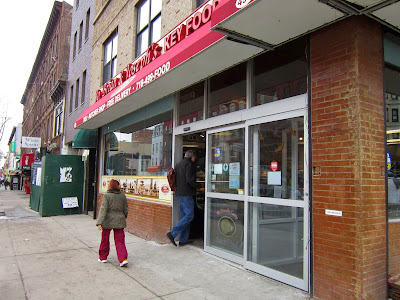 After a mysterious five month closure (power & landlord issues?), the Jo, Brian & Joseph Key Food Market re-opened this morning, much to the amazement of passers-by. The layout of the store has been re-configured, & some shelves remain to be stocked, but thus far the general merchandise looks familiar.  Still wish (unrealistically) it had morphed into something like the Emporium market at Fifth & 8th, with its excellent hot table (that pernil is so good) & fresh produce, but I guess it's handy to have around.  Now we must turn to other enigmas on the block. Next door 491 was sold in 2009 for $200,000, but work on the partially completed new building ground to a halt in 2013.  It was sold in 2014 for just under three million, but there's no activity at the site these days.  What's going on?  And then, of course, there's Mezini, which leased space at 492 Fifth in 2010, and finally opened in '13 as a Latvian owned raw bar, with pricey seafood platters.  These days it has a rather different profile, as a heavily curtained "hookah bar," with a clientele that's perhaps a little too casual for management tastes.  There are surely some stories to be told here ...

Posted by onemorefoldedsunset at Tuesday, March 10, 2015