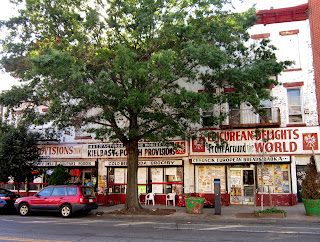 I received the sad news this afternoon that Eagle Provisions, the Polish grocery store at Fifth & 18th, will be closing its doors within a couple of months.  The building went on the market last summer, at $9,000,000, and has now sold.

There's been a Polish store at the corner of Fifth and 18th at least since the 1930s, when the South Slope/Greenwood area was home to a thriving Polish population.  In 1952, a Daily Eagle article put the size of the "Polish colony" at 60,000 strong, and referred to businesses now vanished:  Kostecki's butchers, Gladies bakery at Fourth & 24th - open at 5:00 am for hungry workers - and the White Eagle Tavern (whose crumbling remains can still be seen today), where summer dances were held in the back yard.
John and Richard Zawisny's father, Szecepan, came to Brooklyn from Poland in the 60's, and worked as a sausage maker in White Eagle Market.  The Zawisnys took over the store in 1979.  In '84, John Zawisny still saw the area as "very much a Polish neighborhood," but thirty years later he had a different story:
"It's changed completely ... It used to be a lot of families coming here to do their shopping.  Now the neighborhoods's all hummus, veggie hot dogs and beer."

With a dwindling Polish population, and an influx of newer residents with different tastes, it's hard for this kind of business to stay profitable, and nearby Jubilat, which has an excellent selection of Polish foods, has definitely been a serious business rival.   The pressure to sell up in & move in this kind of real estate market has to be intense.  But it's a terrible shame to think of it disappearing.  My in-laws came to the States from Poland after World War II, and our kids grew up eating plenty of Polish staples.  I've always treasured our neighborhood enclave of Polish culture - I'll be sorry to see another piece of it gone. 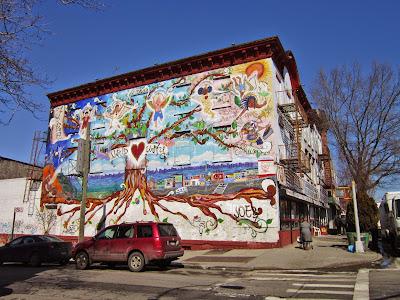 Update: The building is listed by Marcus & Millichap under Transactions Closed, at a price of $7,500,000.

Posted by onemorefoldedsunset at Monday, March 09, 2015