How Your Tax Dollars Are Wasted to Build Luxury Apartments (Gothamist)
On the Real Affordabilty for All campaign to end the 421-a tax break program for (mostly luxury) apartment construction.

While the majority of the housing constructed using 421-a is located in Manhattan, in 2014, Real Affordability for All conducted a study of 61 Brooklyn buildings that received 421-a subsidies. The study found that only 6 percent of the 4,395 apartments in them rented for below market rate; only five of those 61 buildings, constructed in downtown Brooklyn, Prospect Heights, and Park Slope from 2008 to 2012, contained any below-market-rate units.
Of the 257 “affordable” apartments, only 31 were cheap enough for a family making less than $41,000 a year—roughly the median income for city renters last year, according to a Census Bureau survey.
Virtually all those below-market units received substantial public subsidies in addition to 421-a, such as federal low-income housing tax credits and the city’s Inclusionary Housing Program, which lets developers build more apartments than zoning would normally allow if they include some below-market ones. One building with 303 market-rate apartments and 75 “affordable” ones got $11.7 million in 421-a benefits and $86 million from other programs.
The single building that received no other public subsidies got $23 million from 421-a, for 306 luxury apartments and eight affordable ones. The study estimated that each below-market apartment produced cost $642,000 in public funds.

Here's a table that lists the apartment buildings in the study, the tax benefits & other subsidies received, & the number of units built. You'll recognize plenty of buildings here. 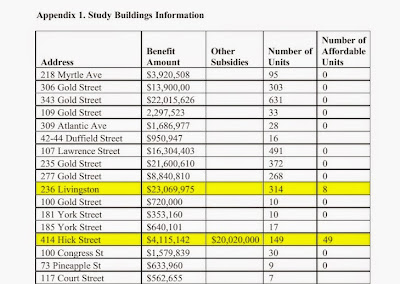 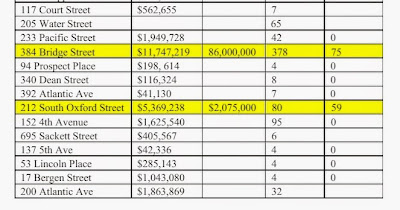 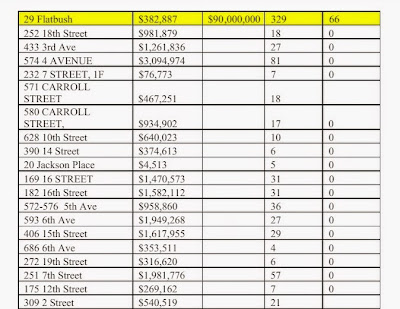 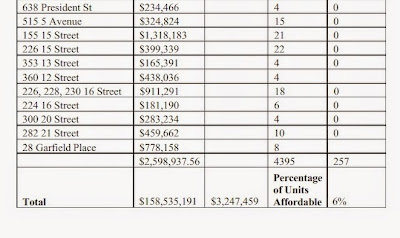 95% Tax Break Paid for by You, Enjoyed by Billionaires (WNYC)


Posted by onemorefoldedsunset at Thursday, March 19, 2015