Shoddy Work on Fourth & Beyond 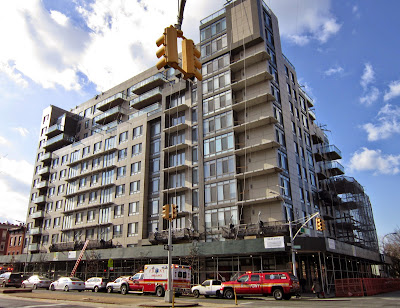 I opened my Sunday paper to see a familiar building (500 Fourth!) on the front page of the real estate section.  It's featured in a story on building defects in recently constructed apartment buildings.

At 500 Fourth Avenue, a 156-unit condo in Brooklyn that opened in 2010, trouble began in July 2013 when concrete fell from the 12-story building’s facade and balconies onto the streets below. A Department of Buildings inspection found cracks in the balconies, resulting in a partial vacate order — residents living in the 94 units with balconies could no longer step out onto them. The city ordered the building to erect scaffolding and a sidewalk shed to protect passers-by.
Reeling from the news, the fledgling condo board hired an architectural firm that determined that the top layer of concrete on the balconies and ledges had not been laid properly and that the glass railings had been improperly anchored. The price tag for repairs topped $1 million.

It's rare to see this kind of real-estate story appearing in The Times, and to borough residents it's hardly news.  These construction nightmares are not just confined to the large developments mentioned in the article.  Pick any nearby down-zoned side street and you're likely to find a boutique condo or rental building with a murky construction history.  How quickly they've become routine.


Posted by onemorefoldedsunset at Sunday, March 08, 2015