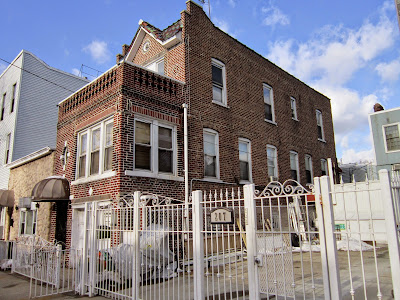 There's a veritable compound for sale at 203-205 32nd Street, just down the hill from Greenwood Cemetery.  The 40"x 100" lot contains a three-family brick (205), a back-house (205 rear), and another property at 203, which looks like it might have been a carriage-house in earlier years.  Records indicate a back-house at 203 too, and a Google earth image shows a building there, but it's unclear whether this is separate from the rear 205 house, or conjoined.  The ReMax listing shows 203 (front) as an unlikely shade of lavender, but a trip to 32nd Street revealed it to be a more mundane beige.  Still, the pebble-front facade is a treatment I haven't come across around here before. Next door (207) is listed as having two buildings as well, but apart from the back-house, there's only what looks like a shed in front.   I'll see if I can find any early images of this part of the block..

Posted by onemorefoldedsunset at Tuesday, February 03, 2015