Questions Linger on Whether Barclays is Good for Local Business (WNYC)

"We're going for Park Slope meets Meatpacking, a well-cultivated & curated group of tenants, and we really want to help change the neighborhood and make it a neighborhood that people want to live and shop and eat and just enjoy." Tess Pintchik

For a look at the Pintchik empire on Bergen Street, read Bobos on Bergen (Jeremiah's Vanishing New York, October, 2010)

"Prosecutors have dropped the charges against a Sunset Park fruit vendor who was arrested for assault and resisting arrest last fall after a cellphone video showed he was the one assaulted by police, and proved that the officer who testified against him couldn’t have witnessed the crimes he was accused of."

I rarely bring my love of the Knicks onto the blog, so why would I mention them this season, as they sink to a new low, and my only meager consolation is the less-than-stellar performance of that team playing over in the Barclays Arena.  But this picture, in the News, made me smile, & brought back so many good 90s memories. 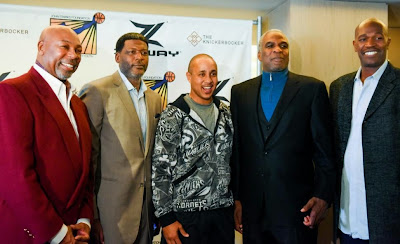 The story that accompanied it?  The Oakman on the long-standing freeze-out he's received from Knicks owner James Dolan.

For all the blood, sweat and tears Charles Oakley sacrificed while wearing a Knicks uniform, the former enforcer has no love lost for owner James Dolan, calling the Garden chairman “a bad guy” Wednesday.
Oakley said he had been “quiet for a while” on his feud with Dolan. Not anymore.
“As hard as I played for that motherf-----, and he don’t want to talk with me?” Oakley barked.

And talking of the Knicks, let's hope Anthony Mason, gravely ill after a heart-attack, pulls through.

Posted by onemorefoldedsunset at Friday, February 13, 2015