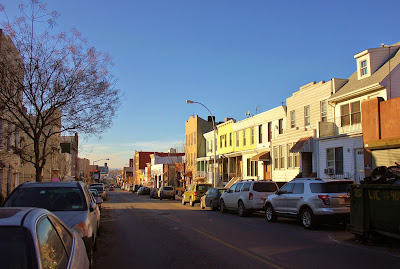 It may be cold, but the light is sharp and clear, and by mid-afternoon the sun is kind to everything it touches. I'm back on 20th Street, below Fifth, one of those blocks around here that dips steeply down towards the water. Look, there's the Red Hook grain terminal, across the water where canal meets bay.  It's not far at all.
The houses on this block are mostly wooden.  You can turn the corner and almost feel you're walking back into a photograph, a Loomis Sperr picture, say, of the thirties of forties, that itself reached back to touch a Whitman world.  You're in a older borough. I love this group of houses on the north side, with their porches still intact.  I love that they haven't become gussied-up-authentic again, with hardiplank siding, and new cornices.  They might look pretty that way, but there's a danger of fresh, expensive tasteful looks, and fresh, moneyed inhabitants severing the connection the houses once had with the older world.  There's no heart in a stage-set.
I like them just the way they are. 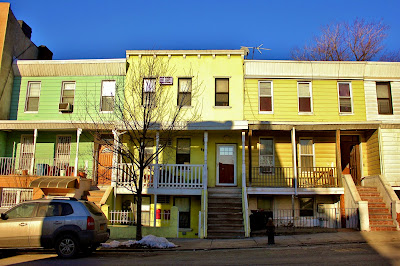 Posted by onemorefoldedsunset at Saturday, February 14, 2015