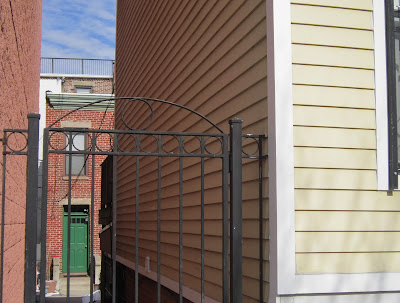 Here's another back-house.  This one's on 8th Street, between Fifth & Fourth, and there's a similar back-house two doors up. I imagine there was originally a third one in between the two.  The front houses on this strip of the block are wooden and the rear houses appear to be brick. 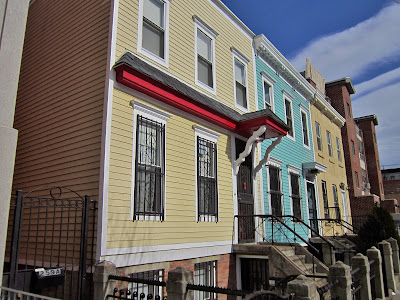 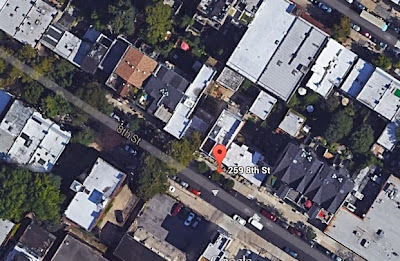 You don't get to see much of them from the street, but a rental ad gives a good view.  You can see it here.  This block has an astonishing architectural mix, from wooden and brick rowhouses, and the beautiful old ink factory (apartments today), commercial back lots to 9th street businesses, walk-up apartment buildings, the St Thomas Aquinas church, and a host of modern & pricey townhouses and apartment buildings of mixed aesthetic charm.  In just this block you can see a busy timeline of an area's development.  It's also about the farthest north in the Slope where you will see this kind of mix.  Yes, there are wooden houses scattered among blocks to the north and east, but most of these are tucked in among late nineteenth & early twentieth century planned development of brick & brownstone townhouse, and apartment building.  What people think of as classic Park Slope. Head south, west of Seventh & it's a more mixed architectural bag.  It's been a target of developer mayhem in the last decade or so, but to me it has more far more character and historical complexity.  And it's been home for a long time

If I had the skill and the time, I'd like to use the Sanborn maps to catalog the back-houses that once existed between 8th, say, and 36th, and find out how many are still standing.

Posted by onemorefoldedsunset at Wednesday, February 25, 2015