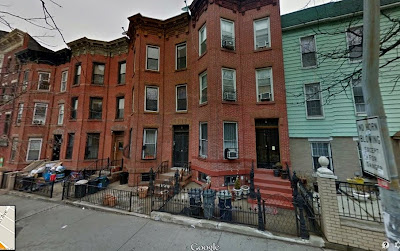 Excuse the wonky picture. Here are four more three-family buildings about to bite the dust in the Fourth Avenue vicinity. 189-195 17th Street, just up from the avenue, have just been put up for sale as a development/conversion site. These brick buildings are still standing, as stated in the listing, but the site is also billed as vacant land. Clearly they're not destined to stick around much longer.

Just off of 4th Avenue, the subject property is comprised of an assemblage of four contiguous townhomes on the North side of 17th Street, immediately upon the R train stop at Prospect Avenue, which accommodates over 18MM riders annually, offering hi-visibility for retail, if desired and ease-of-access for residential buyers/renters. Each of the four lots are 19’.5” x 80’.17”, offering a combined frontage of approximately 80’ along 17th Street ... Offered at: $15,750,000. This offering presents visionary developers and builders of all types an opportunity to respond to New York’s insatiable appetite for luxury condo and rental property. Consider becoming a part of the reshaping of 4th Avenue and its transformation into “The Park Avenue of Brooklyn”. (Corcoran)

The area, according to the broker-speak, is an "emerging community," but it's hardly emerging for those displaced from small, walk-up apartment buildings.  Receding fast, more like.

If you look up at that wonky picture again, you will see a Google-warped lamppost with a sign fixed to it: NO HORN BLOWING EXCEPT FOR DANGER.   Why might horn-blowing be something of an issue here?  Well, this block of 17th, between Fourth and Fifth, is broken up by an entrance to the south-bound Prospect Expressway, and has a steady stream of traffic heading up the block.  Thank you once again, Mr. Moses.  This is another lovely street  - a stately street of brick and brownstone atypical, in this vicinity -  that was screwed over by the power broker.  The expressway entrance is just a few doors up from our development site. 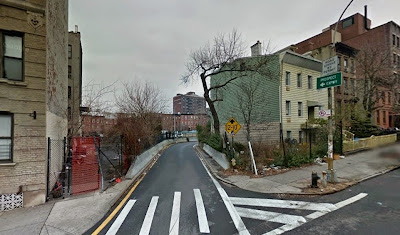 Pity that poor house to the right, with its old lot razed almost entirely away.


Nos. 189 - 95, like all the properties on the north side of the block, directly abut expressway traffic. As you can see here. 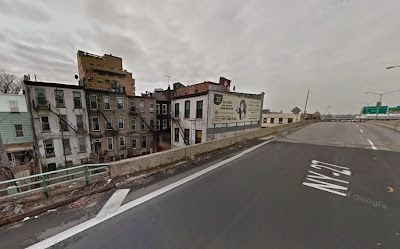 Right around the corner from Brooklyn's Park Avenue, these are today's million-dollar locations.
And talking of corners, stores at the south-east corner of Fourth & 16th have been empty for some time, and the north-west corner business (briefly Country Boys) remains closed. I'm sure some of those visionary developers have plans for them.


Posted by onemorefoldedsunset at Friday, February 27, 2015

Thanks! Unfortunately, this winter has made me rely on Google pics way too much. Can't wait for Spring!