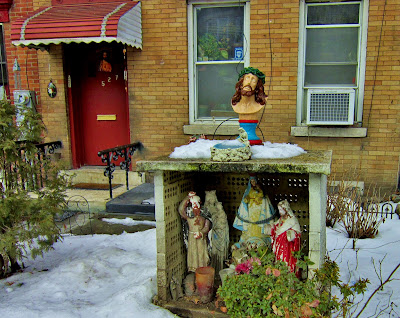 Originally I'd planned to walk from Fifth to Ninth Avenues, but unlike the other side of Fifth, there's no water as boundary, just more and more avenues, and you can keep wandering ever eastward.  I've extended the cut-off to Fort Hamilton Parkway now, but it's always tempting to head just one avenue over.  I glimpsed a knife-sharpener's shop far away on 11th, and almost went to look more closely, but stopped myself.  Unlike the older, irregular landscapes of west of Fifth, the streets tend to the architecturally uniform here, especially beyond Sixth, and sometimes you drift into your own thoughts rather than looking around you.  A mistake.  Every block offers its dramas, enigmas, its small departures from conformity.
On 55th a woman cycled listlessly on a exercise bike at the top of her stoop.  Above a roll-down shuttered garage, Chinese puppets hung in a window.  Close by, a string of infant laundry fluttered on window-bars.   A woman in pyjamas gazed from a doorstep, and a sparrow of a lady, stationed by her gate, stopped me to ask, urgently, "Where did that sun go? I think it's gone for the day, and I've had enough!"
I took the picture up top quickly, but not quickly enough.  A tapping on the glass next door sent me packing. 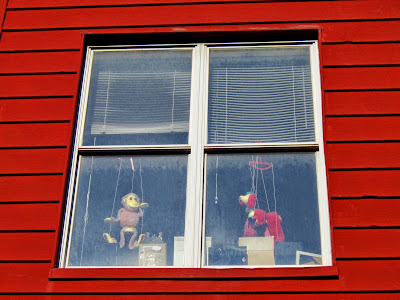 Posted by onemorefoldedsunset at Wednesday, February 11, 2015