Late last year we noticed that yet another gym was coming to the neighborhood.  A story in the Commercial Observer revealed that fitness chain iLoveKickboxing would be occupying the ground & basement floors at 540 Fifth, a new building which looked like a rather creative interpretation of an Alt 1 "2nd - 4th floor vertical enlargement on an existing one-story commercial building."  Now there's an application on file for Alt 1 filing to change use from retail to "physical culture establishment." As we've noted before, there's certainly no shortage of physical culture establishments round here.  540 is just round the corner from Harbor Fitness, and across the avenue from an incoming Crunch. There's a New York Sports Club at Fifth & 9th, two YMCA gyms nearby (9th & 15th) and a number of yoga and martial-arts based studios.  And new Gowanus chain Retro is not that far away on 12th.

I'm tired just thinking of all these work-outs. 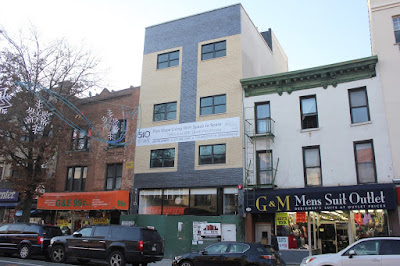 Posted by onemorefoldedsunset at Friday, June 10, 2016