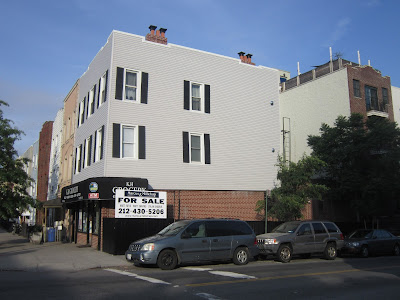 I'm assuming this is the building for sale and not the store, but I may be wrong. If it's the building, it's a quick flip. The building was sold last year to Fimida Enterprises for $890,000, and has apparently undergone interior renovation.
Around here, rising real estate prices & changing demographics have hastened the decline of the deli/grocery, and corner retail is an especially hot ticket for bistros & upscale cafes..  There are four others corner delis left on Sixth between here & Flatbush, and even on busier commercial avenues they're starting to slip away.  Vanishing stores include the Estevez deli at Sixth & 10th, which closed in 2014, and whose replacement, the strangely named Sunset Park Deli, lasted only a few months.  On Eighth and 20th the corner store has been vacant since Joseli Deli closed last year, and on Fifth the 555 deli closed in late '15 when Crunch leased the building & the small retail tenants were turfed out. There are others in vulnerable situations.  The one exception to the closures is the one that appeared at Sixth & Union last year, replacing maternity store Boing Boing.
Rents have risen, & shopping habits have changed.
I hope a deli stays in place at Sixth & 20th. It's reasonable enough to wish for an increase in healthier options at the corner, but ordering your groceries with Fresh Direct, or driving down to Whole Foods to fill up the trunk with high-price organic can never replace a regular trip down the street, for milk or eggs, a breakfast sandwich or a carton of juice.  And if you're lucky enough, some home-cooked dishes too. Sure, you can might get those items elsewhere, but you won't get the local-as-it-gets encounter: the owner who knows you and asks how you've been, the deli cat dozing the afternoon hours away before the nighttime fun begins, the ebb and flow of jokes and gossip at the counter.  This? This has the feel of common ground.  It's not just the food, or the cigs, or a six-pack of beer.  This is where a neighborhood is built.

Posted by onemorefoldedsunset at Friday, June 03, 2016

Well said, as are all your observations.