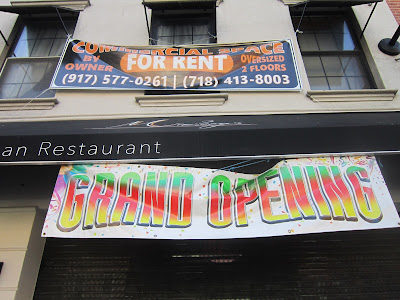 Just three months after opening, Caribbean restaurant Marleey's, at Fifth & 22nd, appears to have closed its shutters for good.  Marleey's took a long time getting off the ground, and after it finally opened its doors it kept irregular hours.  Price point, a seeming demographic lack of interest in Caribbean food, and the sheer costs of running a restaurant in the city may have been contributing factors to its short run.  Nearby Caribbean restaurant Roosters also had a hard time filling seats & also closed recently.  I never got to Marleey's, but the food at Rooster's (and now closed Breadfruit Tree Cafe) was pretty good.  Pitching a restaurant concept in the city's a delicate business these days, & a huge financial gamble.  This end of Fifth's a far cry from the more expensive dining scene to the north, I'm happy to say, and we're still blessed with local, cheaper restaurants offering an abundance of good, fairly priced food.   Let's continue to support them in tough small business times.

Posted by onemorefoldedsunset at Monday, June 13, 2016