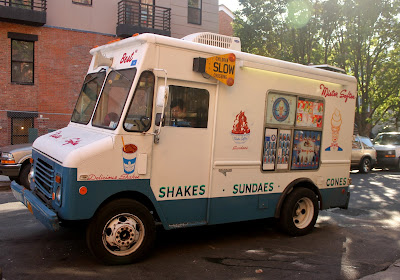 
Which Neighborhoods Will de Blasio's Rezoning Tackle Next? (City Limits)
City Hall remains evasive, but could Gowanus be one of the Mysterious Eight?

Brooklyn Assemblyman James Brennan, first elected in 1984, will retire (Daily News)
On a personal level, I've always found Jim Brennan and his capable staff a wonderful community resource. When seeking help with local issues, his office has always been the first place to contact. He'll be missed by many. The office on Seventh Avenue will be open through December 31.

The Ice Cream Wars:
A Renegade Muscles In on Mr Softee's Turf (NY Times)
“Let me tell you about this business,” Adam Vega, a thickly muscled, heavily tattooed Mister Softee man who works the upper reaches of the Upper East Side and East Harlem, said on Wednesday. “Every truck has a bat inside.”

Ice Cream Man Attacked Pretzel Vendor With Bat, Police Say (NY Times)
The men exchanged punches, and then Mr. Cicero went to his truck, retrieved the bat and hit the pretzel man twice in the head, causing contusions, Lieutenant Gonzalez said.  A witness got the bat away from Mr. Cicero, who then pulled a knife, menaced the pretzel man and fled in the white-and-purple ice cream truck, the police said.

The Hard Side of Selling Soft Treats (NY Times)

Posted by onemorefoldedsunset at Wednesday, June 01, 2016