Meanwhile, at the Station 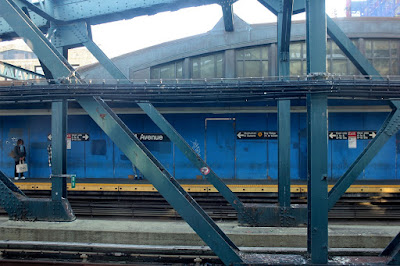 It's hard to tell what's going on at the Fourth & 9th subway station.  Repairs at the station have ground to a halt, with the southbound F platform partly boarded up, and the station retail spaces sitting vacant.  As I passed through the station yesterday, I asked a worker there about the situation.  I wasn't expecting much of a response but the guy was in a chatty mood, and answered my questions readily (much more helpful than this MTA correspondent of several years ago). He didn't see any likelihood of progress soon, and said the stores were in no way ready for prospective tenants. They were just shells, with none of the utilities set up yet.  As for the platform, he said there was no timeline that he knew of for completing the work, and claimed that there was fire damage behind the boarded-up section by the archway.  Perhaps this damage is connected to a fire at the station back in 2014?

This isn't an official progress report of course, but it doesn't sound too promising.  The worker I spoke to was an all-around nice guy - a pleasure to talk to.

Posted by onemorefoldedsunset at Thursday, June 23, 2016