I've been thinking about Bill Cunningham, who died last weekend.  Here's a post from 2011, which I wrote after seeing the documentary on him.  The original's here.

Get over to Film Forum for the documentary on street and society photographer Bill Cunningham.  I went to an afternoon showing, and the house was packed.  It's a beautiful tribute to Cunningham, set against the background of a declining garment industry and the eviction of tenants (including Cunningham) from the Carnegie Hall apartments.  In a fashion world not known for modesty, Cunningham comes across as genuinely unpretentious, consumed not by by a love of status or money, but by fashion itself.  Little is told of his personal life, and his reaction to the couple of candid questions posed towards the end of the film will make you squirm.  The film looks back to Cunningham's early career as a milliner, and to his 1980's work for Details magazine.  It covers a trip to a Paris fashion show (he calls Paris a mandatory twice a year re-education ) and his acceptance of the Legion D'honneur.  Much of the footage shows the then 80 year old on wheels, biking through heavy city traffic (scary stuff) in pursuit of street shots, or en route to the next charity dinner.  The film is very funny, especially when it demonstrates his kindly but sharp discrimination about who is or isn't wearing something of significance (watch out Catherine Deneuve!), shows his blithe disregard for space wasters like kitchens or bathrooms, and presents style mavericks like Iris Apfel, Patrick McDonald, and Shail Upadhya.  It's also extremely sad, as we see artists-in-residence like Cunningham, and the fabulous Editta Sherman, about to be displaced.  Late in the film there's a gorgeous clip from an Andy Warhol film, with a younger, full figured Sherman, dancing the Dying Swan en pointe, and it seems like an elegy for a vanished culture.

The film gave me a great post-screening buzz, and out on Sixth Avenue I found myself nervously elated, dartingly appraising the fashion sense of those I passed. Much of what I saw was pretty tame.  Coming home on the train, my carriage was half empty: a swath of vacant seats surrounded a small, elderly lady and her collection of garbage bags.  I sat a little closer than most, and noticed her bright fuschia skirt, zebra patterned blanket shawl, and the thin fuschia ribbons tied around her long, grey braids.  As the train lumbered along, she drew out a pair of pink gloves, and, shifting the bags slightly, revealed long white knee socks and bright pink slippers. She had far more style than anyone else in sight, and I wanted to take a photograph then and there, but I was too shy and it seemed intrusive.  Still, when she got off at Atlantic, so did I, and I took a quick shot from behind.  Here it is. 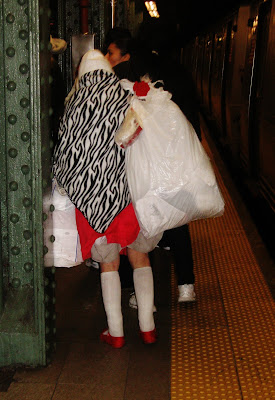 Posted by onemorefoldedsunset at Thursday, June 30, 2016