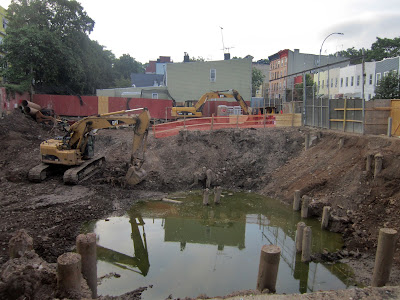 A SWO was issued this week at Shiraz Sanjana's construction site at 695 Sixth.  This is the result of damage to an adjoining property & lack of protection during excavation.  A partial rescind is in effect for backfilling, correcting fencing, and installation of guard rails.

Banned Developer Shiraz Sanjana Back in Action at Sixth & 21st


Meanwhile, at 657 Fifth Avenue, the site of the old Frost warehouse buildings, there's been no activity for fourteen months, and much of the site remain open to the elements. A SWO remains in effect.


Posted by onemorefoldedsunset at Thursday, June 02, 2016