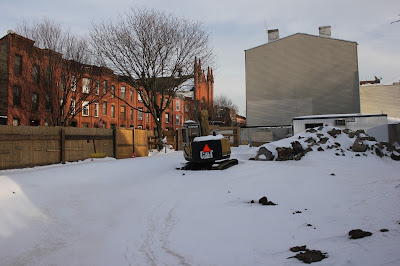 Work at the 4th & 12th construction site, future home to Mercy sheltered housing, proceeds at an extra-slow snail's pace.  When I walked by today though, I did notice something interesting.  At the edge of the site, on the brick wall of an adjacent house on Fourth, some old signs have been revealed. They date back to the time when a playground & community garden occupied the lot. I'm not sure when the garden opened, but I remember it active in the 80s.  It closed due to soil contamination issues from the site's earlier, gas-station days, and the City turned the property over to Mercy Housing in 2011.  The signs have a sweet, bucolic charm.

THIS GARDEN WAS PLANTED BY LITTLE KIDS, 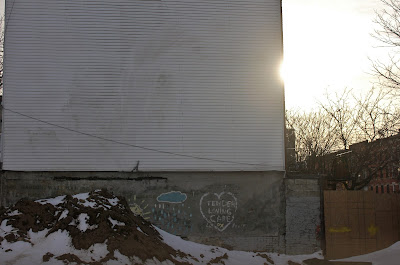 with illustrations of the elements a garden needs to grow - sunshine, water, care.

It's nice to think that sooner or later, another community will grow here.

Earlier:
So What's Going on at?
Finally Some Action at 487?
Fourth & 12th
Permits Posted at Fourth & 12th
Rendering for New Mercy Residence

Posted by onemorefoldedsunset at Tuesday, January 26, 2016