As a city walker, this business of injuring my foot is almost intolerable.  And of course, what sounds the death-knell more grimly than the prospect of a trip to a podiatrist?  Its enough to turn me to (more) drink.  Really, I could get around pretty well, but I don't want to make things worse.  And, then, then, there's the prospect of snow!!  What could be better than roaming the traffic-stalled, snow-drifted streets with a camera in hand?  You can be sure I'll be out there somehow or other.

For now though, I'm under semi-house arrest, reading, watching all manner of stuff on television (Wiseman documentaries, old re-runs of NYPD Blue*), and looking at online photo archives.  I ended up at the New York Heritage Digital Collection today, which has a great collection of rural Brooklyn scenes & Dutch houses, and hundreds (thousands?) of images of places unknown. Streets, boroughs, wooden houses ... all of them monochrome mysteries. Here's one of them. 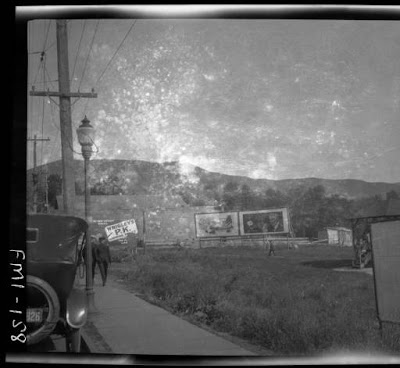 
*I have to confess that the Sipowicz binge-watching actually began several weeks ago, somewhere around Season 7.  It's a bit of a relief to know that there are only three episodes left.

Posted by onemorefoldedsunset at Wednesday, January 20, 2016