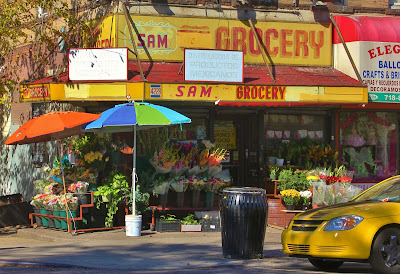 This week the NY Times "Living In" real estate series revisits Sunset Park five years after its last report.  In 2011, the Times described Sunset Park as a friendly, working class neighborhood, & mentioned a revitalized waterfront, the Finnish coops, a thriving Latino & Asian retail scene, & rezoning in its northern borders.  Community Board 7 district manager Jeremy Laufer discussed the fight for community improvements, such as a new high school and an under-construction waterfront park. The What to Do section of the piece centered on the park itself, Latino & Asian food, and the Melody Lanes bowling alley.  In the latest piece, Not Quite Trendy Sunset Park, with a median household income of $42,000, is now labeled "middle-class." According to the Times it possesses a lively Chinatown, & a factory district that "might qualify as hip." The Finnish coops appear again, and now references to Industry City are sprinkled throughout the article. The threat of impending gentrification is mentioned, but is raised not by any of its 50% Latino/40% Asian population, nor by its longtime Italian, Irish or Scandinavian residents, nor by local community organizations of any kind, but instead by newer transplants from homogeneous Park/South Slope, who relish Sunset Park's diversity.

Gentrification can cut both ways, Mr. Southworth admits. His daughter takes art classes at Industry City, a 16-building, six-million-square-foot office and retail complex being created in the factory district.
But he fears that efforts to sand away Sunset Park’s industrial edges could turn it into the next Williamsburg, a transformation Mr. Southworth witnessed when he used to record in a studio there. “Everybody looked like me,” he said. “Here, I could be more unique, and appreciate differences.”

As in the earlier article, the Times pays attention to an attractive largely unspoiled low-rise landscape, but can't resist a sniffy, NYT Real Estate caveat:

While neglect or teardowns don’t seem to have claimed too many buildings, some are less than pristine, with vinyl siding and security bars on lower windows.

In the section on schools, the Times neglects to mention the outstanding performance of predominantly Latino PS 172, which, without a Gifted & Talented program, has been a highly successful school for years. In 2015 172 students'tests scores were in the top five city-wide, ahead of many, far more affluent schools.  This omission is particularly strange, as the Times profiled the school last November

The What To Do list still mentions Sunset Park, and it now includes the waterfront Bush Terminal park.  A Chinatown supermarket market gets a nod, but no Latino food makes it. (Apart from the listed statistic that Latinos make up half the population of the neighborhood, & a brief reference to food & retail in 2011, their presence & culture merit no other consideration at all in either article). Oh & bowling is apparently out too.  Instead, the thrills are found at Industry City's Food Hall, the Brooklyn Flea & Smorgasburg, and a new coffee shop that offers scones.

These Living In articles are sorry fare - amusingly out of touch fluff pieces at best, and at worst, as when the Times visits "gentrifying" almost "hip"lower-income neighborhoods, brazenly insulting - completely dismissive of the lives of the majority of the residents of the neighborhoods they visit, and their fight for economic justice. How about the buyouts of multifamilies, about continued rezoning & environmental concerns, about community ambivalence towards waterfront development now taking place in the area and the kinds of jobs its businesses will offer?  How about a tribute to the strong & beautiful cultural traditions of the neighborhood? All the News?  Not even close, NY Times, not even close.

Posted by onemorefoldedsunset at Wednesday, January 20, 2016