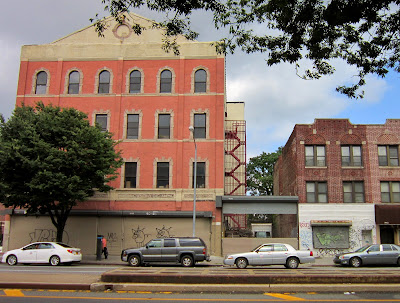 The Brooklyn Eagle reports on the swift sale of the Parkway Garage, at 51st & Fourth Avenue. Though no deed is on record as yet, the price is reported to be over the 7.5 million asking price.  The seller of the warehouse and office space is the Congregation Imrei Yehudah.  According to the Eagle, the new owner, as yet unidentified, is likely to be planning apartments and/or office space.

“This will be a project that will be one of many over the years” in Sunset Park, (Neil) Dolgin (of Kalmon Dolgin Affiliates) predicted.

“This location on Fourth Avenue is only going to increase in value when new projects are going to be created,” he said. “Someone needs to be the pioneer and the rest will fall into place.”

I  photographed the handsome Garage a couple of years ago.  Built in 1907, pre-subway, it stood on a far grander looking avenue:

"In the 1890s, Fourth Avenue was planned as a “parkway” to South Brooklyn, with planted malls down its center, much like Park Avenue in Manhattan. Unfortunately, the malls were demolished when the subway arrived in Sunset Park in 1915 to make way for vents. Until the 1950s, when car ownership and vehicular traffic were on the rise, Fourth Avenue’s sidewalks were roughly eight feet wider than they are today, to accommodate the popular 19th and early 20th century pastime of “promenading.”
(Six to Celebrate: Sunset Park - Historic Districts Council) 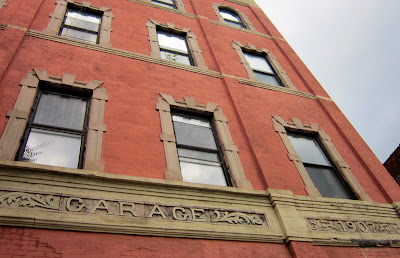 Posted by onemorefoldedsunset at Thursday, January 14, 2016