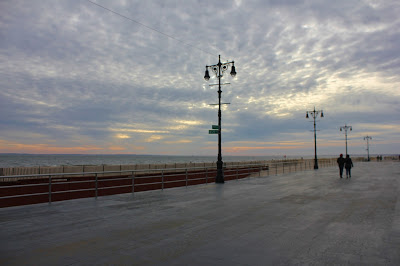 Off to Coney Island again, where a mild winter's day meant a fair turnout of habitual walkers. The old guard.

While I was there my camera went wonky on me.  Most of the shots emerged with a blur that suggested years of shaky memories, even though the images were freshly minted.

On the pier, a group of men were listening to a drummer and a boombox.  A couple in furs played chess.  There was a lot of dyed red hair and this made me happy.  Surely, I thought, this is the city's red hair capital!

The sky was starting to get a little red too.  A man was feeding boardwalk cats, and a woman in a wheelchair was luring seagulls for photo ops.  After she'd gone, the gulls fell into formation on the beach, lined up on ridges formed by the tide.  A jogger on the beach with the body of a boxer fist pumped as she passed me by.  As I made my way back from the Sea Gate end I followed an old woman for a while. I suppose I was tailing her - something about her shuffle, her stockings bunched around her ankles, and her hair so white in the gloaming.  Those stockings - the pink of fabric bandages.  Those skinny, bandy legs.  Before I could take a shot she stopped & turned right round. Her sixth sense shamed me.

Back at Stillwell a man on a bench took off his shoes and wriggled his feet, laughing.  He shouted to a couple of acquaintances crossing woozily on red.  "You still got my number, right?  Don't forget!"  The trains were up to their weekend tricks, but working in my favor for once.  Car's almost empty, N goes local, & gets me home so quickly I've barely been away.

Posted by onemorefoldedsunset at Sunday, January 28, 2018