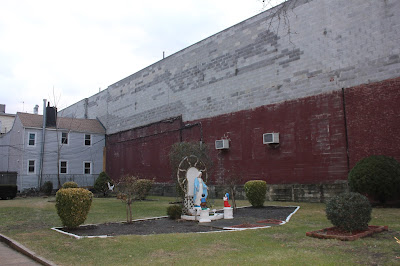 Visiting 10 historic NYC buildings slated for demolition (Nathan Kensinger, Curbed)
Walking out into the bleak midwinter, it felt like no neighborhood institution in New York was safe from the wrecking ball. The beloved (Sunshine) theater’s building has stood on East Houston Street for 173 years, serving as a church, a boxing club, a Yiddish theater, and a doorknob warehouse, but it will soon be knocked down and replaced by a glass office tower.
Just a few blocks away, demolition crews were busy bulldozing part of the 78-year-old Essex Street Market; down the street, the final pieces of the 168-year-old Beth Hamedrash Hagodol Synagogue—recently ravaged by fire, an apparent arson—were almost gone.
As another year begins, the destruction of the city’s many historic places continues unabated.

Fighting the tides of change in Red Hook
Market pressures are threatening to wipe Brooklyn's working waterfront off the map (Crain's)
“People move into the industrial neighborhoods because they are ‘cool’ and then want to change them to suit their needs,” DiMarino said. “You can’t preserve the look if you don’t preserve the businesses.”

Veselka honored for its workday practices with employees over the age of 50 (EV Grieve)
Honestly hiring and retaining an older work force isn’t something that we’ve done consciously or as a matter of policy. When I first started working at Veselka in the late 1960s, the small staff was comprised almost entirely of older Eastern European women who lived in the neighborhood. They were incredibly hard working and very reliable.
When I took over the business in the mid 1970s, I just naturally continued to seek and hire similar type people, many of whom came to us through word-of-mouth from the existing staff. In general, we’ve found that older people are more reliable, more stable and more loyal to their workplace so they tend to stay for longer periods.

To Be, or Not to Be (NY Review of Books)
The topic of my talk was determined by today’s date. Thirty-nine years ago my parents took a package of documents to an office in Moscow. This was our application for an exit visa to leave the Soviet Union. More than two years would pass before the visa was granted, but from that day on I have felt a sense of precariousness wherever I have been, along with a sense of opportunity. They are a pair. (Masha Gessen)

How Design for One Turns Into Design for All - (New York Times)
It turns out that one out of five adults in the United States has some disability, according to the Centers for Disease Control and Prevention — one out of 20 children. That’s a demographic and economic motivator. But we also know that when people feel better about themselves, medical outcomes improve.

Open Call - Sound Photography (Cities & Memory)
The project examines the relationships between photography, images and sound by inviting sound artists to create a composition based on photographs submitted from around the world.
Photographers will submit images from their portfolio, which will be presented to sound artists and musicians to create a sonic response to the image they see before them.
The result will be a global, multimedia collaboration between photographers and sound artists, and between images and sound.
The deadline is Sunday 11 February.

Black Men Walking: a hilly hike through 500 years of black British history (Guardian)
Dawn Walton started Eclipse in Sheffield after moving there from the south. “We’re a northern company,” she says, “a Yorkshire company, and I’m very proud. We’re black and Yorkshire, y’know what I mean?” Founded in 2010, Eclipse is the foremost black-led touring company in the UK. Three years ago, it launched Revolution Mix, a “movement” that aims to tell stories of black British history. “Every time a black artist is in a costume drama,” says Walton, “people kick off. I don’t know why. Like many of us, I’m very aware of the history – the erasure, actually – of black British people. Researching the last 500 years, it’s a pretty rich scene. And guess what – no one’s told those stories. So that’s my playing field.”

Wapping Stairs (Spitalfields Life)
I need to keep reminding myself of the river. Rarely a week goes by without some purpose to go down there but, if no such reason occurs, I often take a walk simply to pay my respects to the Thames.

The Pointe Shoe Makers of Hackney (Spitalfields Life)
Contributing Photographer Patricia Niven and Novelist Sarah Winman visited the Freed of London factory in Well St to create these portraits of the Pointe Shoe Makers, an elite band of highly-skilled craftsmen who make the satin slippers worn by the world’s greatest ballerinas.

There is something inaccessible and mysterious about this world – from the Makers’ symbols, to the language of the shoe, to the exclusive world of the finished product. And yet, I found the Makers to be a pragmatic group of men, into football not dance, who have become blasé about praise and who all refer to the making of these shoes as a job, irrespective of the beauty, the artistry of the finished product. They live in a world of chiaroscuro, where prima ballerinas, surrounded by bodyguards, turn up in limousines to applaud them whilst they stand at their benches six days a week producing nearly forty shoes a day, a quarter of a million shoes a year.

Posted by onemorefoldedsunset at Thursday, January 25, 2018